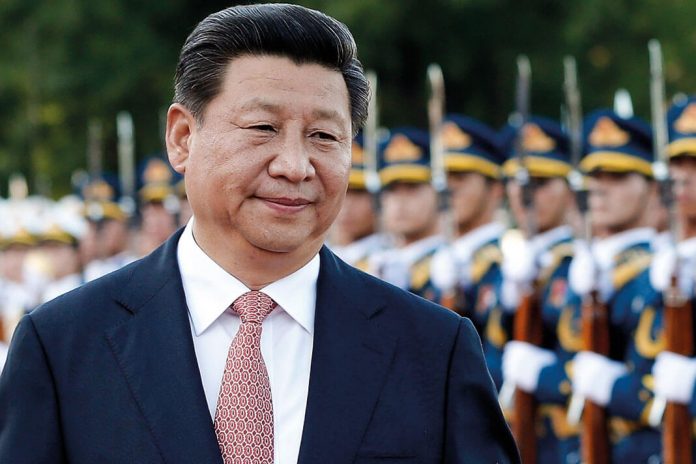 On the final day of a week-long political summit in Beijing—the 19th Party Congress, President Xi Jinping, who was given another term, pledged to lead the world’s second largest economy into a “new era” of international power and influence and be on top among the great world powers by the mid- 21st century.

At the closing ceremonies at the Mao-era Great Hall of the People, it was announced that Xi’s “Thoughts for the New Era with Chinese Special Characteristics” had been written into the party constitution, an honor extended only to Chairman Mao and his “thoughts.”

The congress unanimously agreed that Xi Jinping’s “thoughts’ “shall constitute [one of] the guides to action of the party in the party constitution,” Since the Communist Party of China was founded in 1921, only one leader, Mao, has been honored with the incorporation of his “Thoughts of Chairman Mao” into the constitution.

The conventional wisdom is that Xi’s rise reflects a broad consensus within the party that a strongman was needed to help China avoid a Soviet-style collapse. Indeed, there had been a sense among China’s political elites that “if Xi didn’t clear things up, then the place was going to implode and the Communist Party was done” and that Xi was their last hope.

The replacement of the thoughts of Chairman Mao encapsulated in the Little Red Book, which had become the bible of the Chinese, with the “Thoughts for the New Era with Chinese Special Characteristics” of Xi Jinping was the most significant of the most recent developments in China centered on Xi’s election. However, the Chinese would not want to put undue emphasis on this development so as not to alienate the doctrinaire left, some of whom are still wedded to the populist Marxism of Mao, and who directly opposed the democratic centralism favored by his successors, from Deng Xiaoping to the present. If Mao’s “thoughts” constituted the Old Testament of Christianity, Xi Jinping’s is the New Testament, Under the present, more open Chinese society, these thoughts are no longer considered “revisionist” that would carry a heavy penalty.

But what exactly is socialism with Chinese characteristics? The conventional definition is that it is a centralized economy which is claimed to be based upon scientific socialism. It supports the creation of a socialist market economy dominated by the public sector given that China is supposed to be in the first stage of socialism. The Chinese government maintains that it has not abandoned Marxism but has tweaked or improvised many of the terms and concepts of Marxist theory to accommodate its New Era. Indeed, the CPC argues that socialism is not opposed to these economic policies. This view explains to a large extent the Peking government’s flexible economic policies in the development of the economy.

As with communism, socialism can mean a variety of things to different people depending on the historical context. Within the school of Marxism, China claims to be in the primary stage of socialism which in the end will evolve into the establishment of true communism. Xi Jinping was very careful to point this out lest he antagonize the leftist doctrinaires as did his predecessors.

After Mao’s death, Deng Xiaoping’s followers agreed that China was still in the first stage of reaching pure communism, apparently to “criticize and repudiate” the beliefs of the communist left. The term reappeared at the 6th Plenum of the 11th Central Committee on June 27, 1981. This was contained in the “Resolution on Certain Questions in the History of our Party since the Founding of the PRC” in the 1981 plenum.

In 1987, Acting CPC General Secretary Zhao Ziyang, wrote that socialism in China was in its primary stage due to the undeveloped state of the country’s productive forces. During this phase of development, Zhao recommended introducing a planned economy on the basis of public ownership. He blamed the communist right for failing to acknowledge that China could reach socialism by bypassing capitalism. The main failure of the communist left was their belief that they could leapfrog from the primary stage of socialism to economic modernization. On October 25, 1987, Zhao explained that the central focus of the Chinese state was economic development, but that this should occur simultaneously through centralized political control.

CPC General Secretary Jiang Zemin further elaborated on the concept 10years later; first during a speech to the Central Party School on May 29, 1997, focusing on three points to develop the primary stage of socialism:

• One, develop a socialist economy by modernizing the forces of production while developing a market economy.

• Second, “managing state affairs according to the law, developing socialist democracy under the CPC and making the “people the masters of the country.”

• Lastly, building a socialist culture with Chinese characteristics—meaning the turning of Marxism as a guide to train the people so as to give them “high ideals, moral integrity, a good education, a strong sense of discipline, and developing a national scientific, and popular socialist culture geared to the needs of modernization, of the world, and of the future.”

What are the implications of the new thought in China on the Philippines? For as long as the Xi government continues to adhere to its open door policy and allow market forces to temper the constraints of a centralized economy and continue its soft power projections in our area, the least we can say is that we will have more of the same from our big neighbor.

Xi has promised to stress the importance of economic liberalism both “bringing in” and “going global.” This augurs well for the world economy. If he deepens economic and financial reforms and further opens its markets to foreign investors, this will be good all around. Indeed, the promised pursuit of marketoriented reforms of its foreign exchange rate as well as its financial system, and as promised, allowing the market to play a decisive role in the allocation of resources, a source of anxiety in world financial circles will be removed.

The Xi new thought’s promise to preserve the existence of capitalist features in Chinese society which were slowly introduced in the post-Mao period by his predecessors Deng and Zhiang, now encapsulated in his “Thoughts for the New Era with Chinese Special Characteristics,” is now embodied in the party constitution and attributed to Xi Jinping himself.

The world can therefore continue to expect from the new regime a centrally planned economy based on a one-party state that will be more outward looking and liberal.

What is the fastest supercomputer in the world?