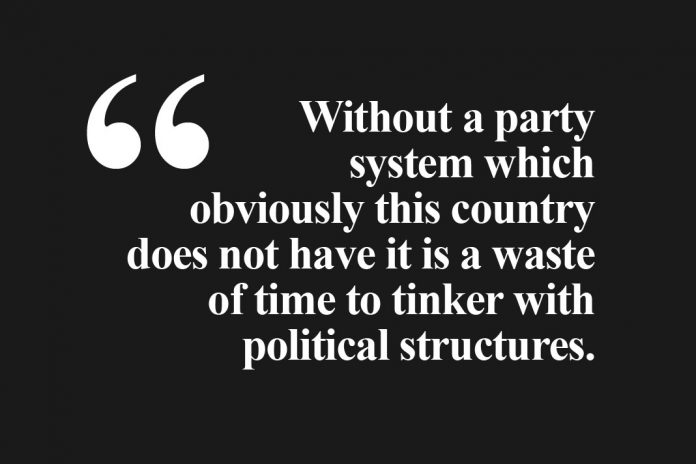 The bedrock of liberal democracies often represented by both unitary or federal systems are the competitive party system. They act as a check and balance to autocratic governments and abusive administrations. Without a party system which obviously this country does not have it is a waste of time to tinker with political structures. Should the federalism movement succeed in this country you can expect a national government controlled by a politically entrenched business elite and federal states by dynasties.

At one point in time we did have a competitive two party system – the Nacionalistas and the Liberals which succeeded each other until Marcos imposed martial law which killed the system with one party governance under the KBL.

But still and all, we really never had the equivalent of mass-based parties that represented every sector of society the reason why pre-Martial Law parties folded up so easily after EDSA. These parties where led by elites and dynasties. The sugar bloc lorded it over the Nacionalista Party while traders and the new industrial elite lorded it over the Liberal Party. The marginalized and alienated agrarian societies formed the nucleus of the Communist Party in this country which was banned from participation in the political process and therefore took up arms against the government in order to have the voices of the sacadas heard.

Today, mass-based organizations represented by Red flags and leftist or populist slogans have been excluded from political participation which was so obvious in the SONA where they were relegated to street corners where they had the other SONA. The beautiful people with their expensive Ternos and pricey Barong Tagalogs were in stark contrast to the t-shirted descamisados of the street marchers.

Political parties today are only vehicles for elections which when over allows them to take a slice at the congressional positions. The fractured PDP-Laban which was supposed to be the ruling party lost its leadership in both houses of congress in quick sequence which revealed its paper tiger status. The 188 congressmen that voted for the new speaker are hardly recognizable. These are splinter groups surrounding a few personalities usually armed with substantial logistics.

What these aggregation of politicians grouped into small tribes that go by the name of political parties have still to reveal their political persuasion, principles and philosophy.

In the proposed federal states the situation will be even more chaotic when entrenched political families fight for power and influence. In this country family first the nation later. A problem is that it is easier to buy a region than a nation and it does not take a billionaire to control the votes of a smaller electorate. What will emerge then will be stronger regional leaders who will be independent of the center and who will go their merry ways at a time when what the nation needs today is a tightly knit republic with a common agenda and sharing a united vision of development. Indeed, Imperial Manila will be replaced by independent dukedoms that Garibaldi in Italy fought so hard to subdue in order to create an Italian nation state.

If mighty Russia and Yugoslavia could not prevent the fragmentation of their states can we ensure that we will not end up with the likes of the cantonal state of Negros at the beginning of the last century?