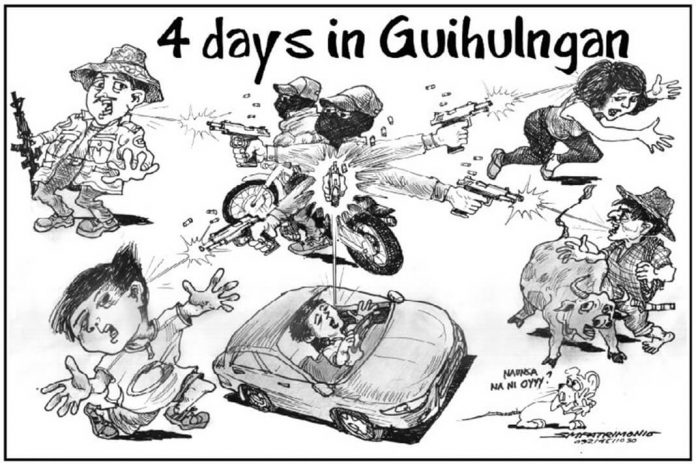 The protracted civil or revolutionary wars, whatever you call it, would seem to have no end. It is because neither of the parties want to hang their guns away. So the war goes on regardless of the number of peace or PR talks.

In the case of the recent offensive in Guihulngan wherein six fine policemen were ambushed and killed by the red rebs, the killings continued this week with three killed and two wounded in four days.

It is as if there is an apparent retaliation of the victims’ side vindicating their fallen comrades-in- arms. The police stays mum and presents the new killings as simple crimes but are they? To many, it looks like vendetta killings. So what is next?

The Marawi War hit its 100th day over the weekend. What the government underestimated was how prepared the enemy was. First responders from the military say that they simply were pinned down and were caught flat – footed. Such an offensive would not have gone that far if there was enough effective counter intelligence. Instead, there was complacency on the side of the government. In fact, the country’s big wigs went to Moscow on the day of the Marawi siege. Prepared?

On SU founders’ day, among our guests were Sillimanians from Marawi. They told us that the war will continue because the children of the next generation will use today’s atrocities as the basis of future retaliation.

Can we stop a war that seems to have no end? If so, how?