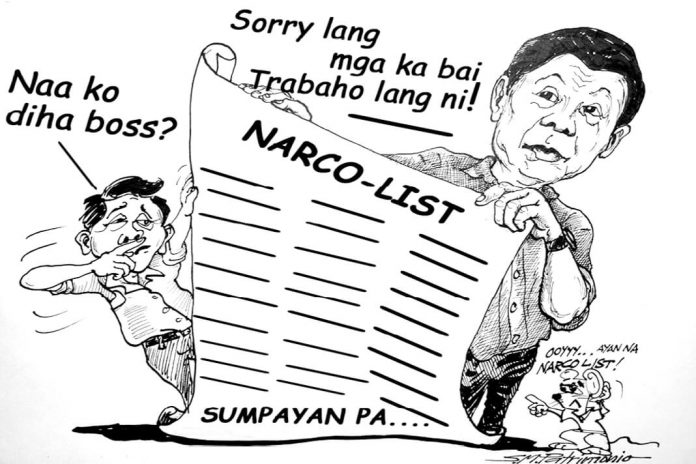 DUMAGUETE CITY – Long before the age of tokhangs and EJKs, already the influence of illegal drugs in the barangays have been noted with concern but in whispers.

The old offer of drug lords is P150K/ a month  for  village chiefs who will look the other way and not interfere in the drug trade.  We personally talked with one who said he refused. But how many of the 42,000 barangays all over the country succumb?

Not until the 21st century under the ages  of the Duterte regime has narco-politics been much exposed abhorred and hunted.

Warnings were  long raised by the President that by the end of the barangay elections of May 14,  the government enforcers will resume the crackdown on illegal drug trade but this time in the barangays.

Many barangay officials who were included in the so-called narco-list meaning list of politicians engaged or hooked in the illegal drug trade have been re-elected, some elected for the first time.

No they are not vindicated by the Aguinaldo doctrine because they have not yet been accused. After elections, if those in the narco-list are elected, sorry na lang, the Duterte enforcers said they will have to pursue and prosecute without violence.

Those who can invoke the Aguinaldo doctrine in the narco list are covered if they were already formally charged  or indicted  before elections, but no, none of that is noted.  Therefore, those in the list are considered fresh indictments.

We don’t know yet how the Duterte boys will effect this hot pursuit of narco drug peddlers after Monday’s elections.

As many too are expected to resist, the enforcers have to implement the rules of engagement. The instruction is to sow no violence but if the enforcers’ lives are threatened, —supported by evidence—- then they have to respond sparingly without the full force of guns and bullets to fatal targets.

For Dumaguete and Negros Oriental, the jails have lately  been spared by the old manner of hook shot distribution.  With General Bato at the helm at the Bilibid national penitentiary, we expect to see changes for the better.

But why wait for the dreadful knock in the day (no more night raids) when to surrender when one can face a lower penalty especially if it is coupled with admission and plead bargaining?

The working order is: accept the surrender, their  admission, and submit the victims for rehabilitation in exchange for : no charges.