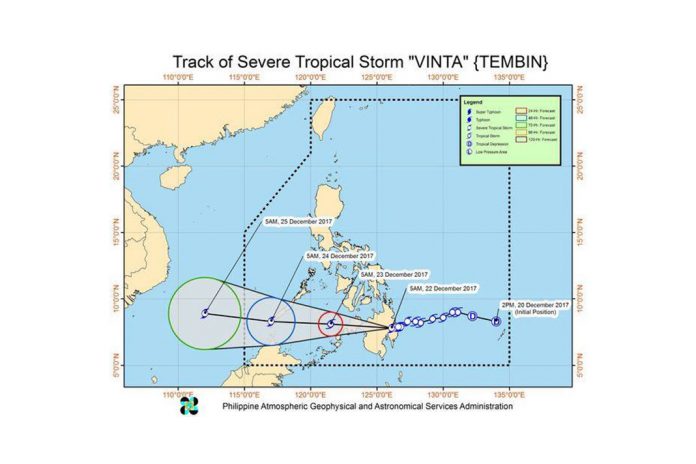 DUMAGUETE CITY – By Mother Nature’s stroke, Negros island and the entire Visayas for that matter, were spared by the fury that was Tropical Depression Vinta which diverted its course to Dipolog on to Palawan last Friday.

Vinta was packing winds of 85 kph with gustiness at 120kph. Central Visayas would have been a direct hit had the tropical cyclone  not diverted itself to Mindanao and Palawan Friday morning.

However rescuers continue to clean up the debris clogging the spillways following rampaging waters which were the side effects of typhoon Vinta which diverted its path and confined itself in the Mindanao island and on to Palawan.

As the “weather itself is changeable as the weather,” tropical storm “Vinta” has earlier intensified and is now barreling towards the Palawan region, after wrecking havoc its path as it crossed Mindanao. Vinta was hurling itself  with maximum sustained winds of 85 kph near the center and gustiness of up to 120 kph.

The damage in Negros Oriental is virtually nil while being assessed by government surveyors.  Dumaguete had virtual zero destruction. Thanks to local rescuers who easily responded to distress calls especially those living along the  river  banks.

Vinta was located 510 kilometers east of Hinatuan, Surigao del Sur at 4 a.m. Thursday and crossed to   Mindanao  but diverted itself and spared the  Central Visayas, the south  o Negros.

Vinta  is now moving   towards   southern tip of Palawan from Friday until Christmas Eve,today,  before leaving the Philippine Area of Responsibility on Christmas Day, PAGASA said.

PAGASA also warned that scattered to widespread rains are still  expected in  Caraga, Davao, and Northern Mindanao  and Palawan within the next 24 hours. Residents of these areas should be on alert for possible flash floods and landslides as an aftermath of tropical depression Vinta.