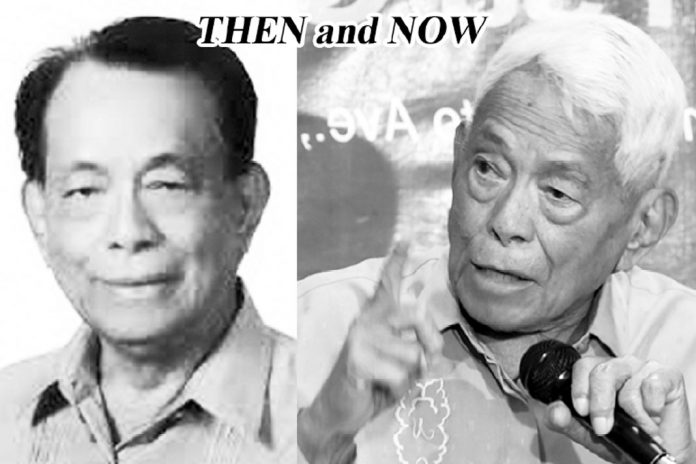 His long and storied career as a statesman is filled  with moments of moral courage as he stood firm against the oftentimes cruel realities of politics and history.

When he was Senate President , he visited Dumaguete and took time to meet with the members of the Dumaguete Press Club. He even accepted our invitation to induct  our  new officers. (see  photo inside) at the press club building along the boulevard

Most of all “Tatay” Nene  was our biggest benefactor of P1.5Millioin which was used to construct the sea wall that protected the press club building from  the big waves. (see Photo inside)

The sea wall now stands firm as protector of the house of media in Dumaguete along the boulevard. Thanks too to the city administration which replaced the old wave breaker which was  built too weak to withstand the big waves. The Press Club building now stands well and with enough strong shoreline protection.

The Malacanang -donated landfill (now an all-brick Pantawan-2 by the City ) built thru the Presidential Social Funds , is a living memento of P1.5Million from President Gloria Arroyo who approved the  landfill to protect the media building from the big waves.

May we all draw inspiration from Pimentel’s  example to show the same courage and principle during these challenging times.

“The former law dean from Cagayan de Oro Senator Pimentel was not a tradpol  public servant. He was, above all, a steadfast advocate of true reforms and real change, a defender of the rights of all, a man of humility honesty and integrity, a constitutionalist and a great Filipino and patriot,” said the Constitutional Commission in which he was the vice chairman.

“The Filipino nation will forever be grateful to Senator Pimentel for his unselfish service and great sacrifice. He will surely be missed, but his legacy will live on and continue to inspire Filipinos in seeking and aspiring for a better nation for themselves and their children,” it also said.

“Wednesday was a sad day for the nation. We all joined all Filipinos  in mourning the demise of former Senate President Aquilino Pimentel, Jr. and expressing condolences to his family, loved ones, colleagues and friends,” said Malacanang.

The  Duterte administration is grateful to former Sen. Pimentel for joining the government as a member of Consultative Committee designated by President Rodrigo Duterte to review the 1987 Constitution and draft a new charter that would pave the way for a federal form of government.

“Our people thank former Senator Pimentel for his long, fearless and principled track record of public service. He would forever be etched in our history as a giant among his peers who championed democracy and electoral reform and a visionary who espoused devolution of powers and strong local governance,” said Sal Panelo presidential spokesman.

Vice President Leni Robredo also said the country lost one of its last statesmen  of this country.

“As we pay tribute and honor to this respected and courageous statesman, we fervently pray for the Almighty to grant Senator Nene eternal repose. May the perpetual light shine upon him,” she added.