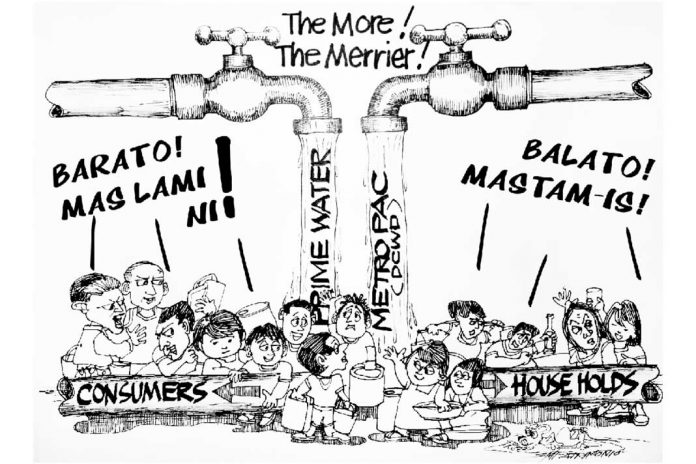 The government both local in Dumaguete and national in Manila—, are in  the right track in focusing on the concern for the future ——which is ,  to have ample water supply for the next generation  of consumers because the world is not getting any smaller. In fact, it is fast getting more crowded every day.

But getting crowded” is relative, —like the half-empty-half-full principle.

In Manila, the issue is our President—even as we laud his decisive acts, has warned Maynilad and Manila Waterworks that they have been allegedly robbing the people of Manila of money to finance their   twin water systems.  In fact it’s a kind of an onerous conjugal relationship.

The onerous waterworks contracts by the MM concessionaires, as Duterte claims, has been bleeding the people of the cost of doing business like penalizing them for the  increasing the population of water drinkers thru increased water rates;  second,  bleeding them by letting the people pay the water system’s corporate income taxes;  and third, by barring opposition from all quarters to oppose or dictate   water rate increases.

Says the President. Now he has revoked the water contracts, revised its provision eliminating the onerous ones, and adding what is advantageous to the people, and warned, that if this revision is not acceptable to them, the government will take over the water system, open it to new players, and sue the present concessionaires of Maynilad and Manila Waters with plunder, which is non- bailable, or, to jail they all go.

That is what you call REAL POLITICAL WILL POWER.

And even if the president has a mouth full of foul language, still, the people are happy because we have a president who is MAKA MASA, and who acts and feels for and like the people.  Never mind if he is just acting, but what we see is what we get.  Never mind if he will be president for life.  One thing, people will not exchange him with any dictator’s son, kin, or daughter.  Kana, never gud. It’s PRRD or none at all, for the time being at least.

Even Lacson or Honasan or Delima  agrees to that.

When PRRD is gone into history, as  all are bound to go, when his time is up, it is now the people’s problem to find a suitable replacement.  But not the goner who will chose his successor. That is not democracy anymore. Besides he was chosen by 16million. Let’s see how many will choose his replacement if they can match that mandate.

The best lesson our local water providers will soon learn is that :  MORE IS MERRIER.  This is a better and lasting   and timeless Christmas gift.  The more concessionaires or water suppliers   are here in Dumaguete , the more the people will have better choices.  Each one has to out-do the other in terms of prices and services.

The stakeholders especially the water consumers can no longer stomach what used to be endless arguments between the City Government and the  Dumaguete City Water District. Good that one of them has softened and gave way. Guess who.

Before, the City Government and the City Water District just ran in circles while  the population of water consumers are getting larger. Soon  water will  not be  supplied in steady abundance. Water supply will get more scarce  if nothing is done,  and they better stop  arguing  ad infinitum. Guys, shut up and put up! We are glad you are starting to sober up now.

The entry of Prime Water by the City Government will match the dwindling service of DCWD which is anticipating a future incapacity thus, the DCWD also  took a partner in MetroPac.  But careful now, City-run Prime Water, and that is proven by history here.   Watch them, and cut them off with impunity if the politicians and their cronies,  do not pay their water  bills on time.

We say, go ahead boys, make it good, the more the merrier. We consumers will be happy because you will be competing for lower rates and better service. Water will be cheaper by the dozen.

If you like, let’s welcome even  a third player water supplier for the City.

ALL THE BEST THEN FOR THE NEW YEAR!