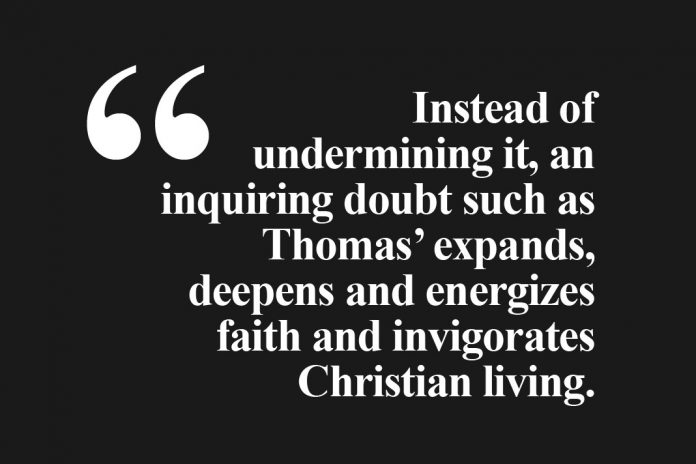 Inquiring Doubt. Edward Markquart summarizes Henry Drummond’s distinction between a doubter and an unbeliever in these words:

A doubter is a person who searches for God and the godly life. A doubter is a person who has a thousand questions about God; questions about life, love, God’s existence, purpose, the divinity of Christ and many other questions. The unbeliever is apathetic to God and the God question does not really come up in his or her daily life. A doubter struggles with God and struggles to live a goodly life and struggles to find the purpose of life, but not an unbeliever. An unbeliever simply struggles to pay the bills, find a spouse, find a job, find a house. That is all (Edward Markquart).

Thomas was a doubter, but not an unbeliever. His doubt was the kind of doubt that sought to believe. It was a “…seeking doubt, a doubt that wanted not to continue to doubt but to come to believe” (MacArthur). Although for a moment he doubted the report about the resurrection of Jesus, he had the intention to believe. That was why he decided to stay with the disciples in a house where Jesus had appeared to the other disciples earlier. And when Jesus appeared to him, he did not even dare to touch the wounded parts of Jesus’ body for his faithseeking doubt had already been satisfied.

Instead of undermining it, an inquiring doubt such as Thomas’ expands, deepens and energizes faith and invigorates Christian living. Why? Because such a doubt is not cynical or closed-minded, but is open to, and welcomes, God’s truth that is far too vast for our finite minds. His inquiring doubt led Thomas to make the most complete affirmation of the person of Christ when he confessed, “My Lord and my God.”

The importance of inquiring doubt or a doubt that seeks to believe is evident in one important practical way. One who journeys from doubt to faith has better chances of having a clearer understanding of what he/ she affirms. In the process of rigorous questioning, he/ she could identify and separate liberating truth from falsehood. Hundreds of years ago Christians used the Bible to argue that the earth was flat and that it was the center of the universe. Copernicus doubted that theory. He then embarked on a rigorous scientific study that proved that the earth is round and that it is not the center even of our solar system –the Milky Way.

Thomas’ inquiring doubt makes us less vulnerable to falsehood masquerading as truth. It guards us against gullibility. It “tests all spirits,” motivates us to be satisfied with nothing but the truth that truly sets us free. It enables faith to suspend judgment and decisions until it has credible reasons or bases for believing and trusting. As the poet Alfred Tennyson aptly put it, “There lives more faith in honest doubt than in half of the creeds of Christendom.”