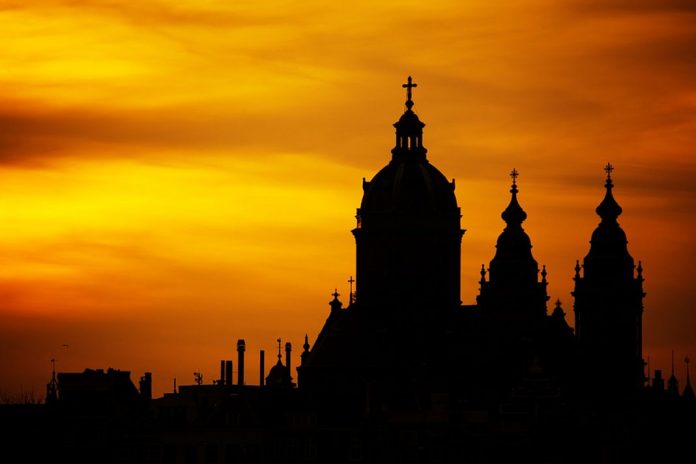 The Church, which is a spiritual community of faithful people, established on earth as a hierarchically ordered society, is directed to the spread of the Kingdom of God , with the aid of the Holy Spirit. The Church has its proper mission in the religious sphere, and from that mission it can offer light and energy to the human community so that it might be structured in accord with God’s law. The Church recognizes the autonomy, laws and values of the temporal order, so long as they respect the Creator’s design. The faithful, in keeping with their vocations, are to see to it that temporal affairs are ordered in accord with God’s plan. The Church is not tied to any one form of human culture or any political, economic, or social system, and it can bond together diverse human communities.

The Church acknowledges and defends religious liberty for all persons; they are to be free from all coercion to lead their religious lives, privately and publicly, according to their consciences. The Church has a right to its own freedom and independence, so that it can fulfill its own saving mission; it claims the right to live in civil society according to the norms of Christian faith. This religious liberty is the fundamental principle of the Church’s relationship with the state. The Church takes its place in the community of nations, and strives to work with them for justice and peace in the world.

The Church has a threefold function: to teach all nations, to sanctify those who believe in Christ, and to govern God’s people. The three come together in the Eucharist, and they are all directed to the praise of God and the sanctification of humankind. Sacred ministers, i.e., bishops, priests and deacons, have a leading role in these functions, but all of the faithful, since they share in Christ’s priestly, prophetical and kingly functions in virtue of their baptism and confirmation, also have their own role in fulfilling these three functions. But all the faithful should allow themselves to be supervised and directed by proper Church authorities.