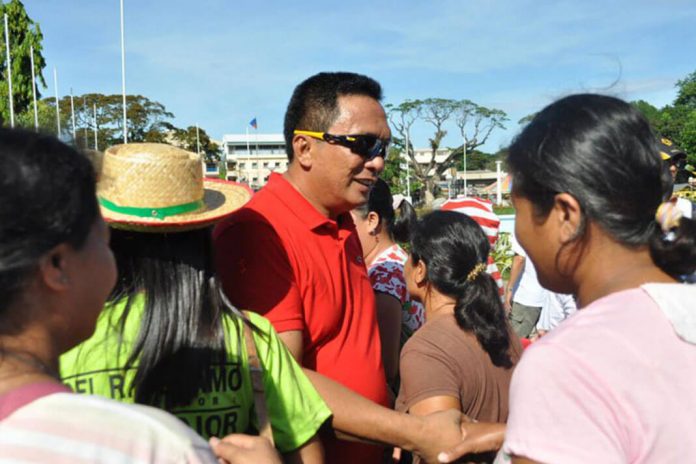 NEGROS ORIENTAL – Exactly 90 days after his decision to step down and honor the order of preventive suspension by the Sandiganbayan, Governor Roel Degamo is back at the helm after securing a 60-day Temporary Restraining Order (TRO) from the Court of Appeals.

Degamo has to get a permanent injunction so he will not face removal again after 60 days when his TRO expires.

Hundreds of Degamo’s supporters mass in front of the provincial Capitol and freedom park to warmly welcome the return of the province’s ultimate political underdog. As the first board member, was catapulted to the governorship by succession after both Govs Macias and Perdices died in close succession.

Policemen were deployed in the Capitol to assist the Department of Interior and Local Government in implementing a peaceful turnover among top officials of the province.

Many of Degamo’s supporters came from as far as Guihulngan City and Basay down south. They were transported by huge trucks and camped outside the Capitol until Degamo, at past 8:00AM, went up to his office accompanied by triumphant backers composed of ordinary people, businessmen and politicians to reclaim the office of which he was elected by the widest margin in the recent history of the province.

The Court of Appeals said that the civil-offense alleged to have been committed by Degamo when he spent P 10 million purportedly as intelligence fund without authority from the Sangguniang Panlalawigan has been condoned by the people upon his re-election pursuant to the Aguinaldo doctrine. But the criminal aspect remains pending.

Meanwhile, Vice-Governor Macias calmly received the resolution from the Court of Appeals as enforced by the Department of Interior and Local Government to step down from the governorship.

For the next three days, Degamo received a steady stream of well wishers of people from all walks of life even as he vows to seek redress of the repeated injustice inflicted to him by the Office of the Ombudsman.