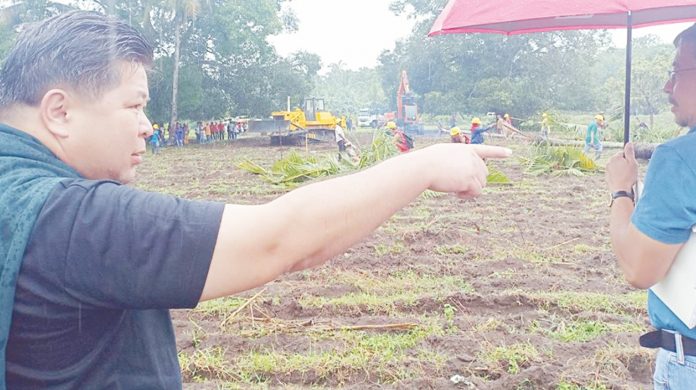 DUMAGUETE CITY – The National Housing Authority (NHA) has finally retaken possession of the more than three-hectare lot it acquired in 2011 as a re-settlement site for victims of typhoon Sendong after the tenancy issue was resolved.

Because of bureaucratic delays, informal settlers occupied big parts of the NHA-acquired property. The NFA took legal steps to repossess the same. Now, NHA is in control of the properties anew.

Armed with the order from the Department of Agrarian Reform Adjudication Board (DARAB) as the legal basis to take possession of the property, representatives from the NHA, city legal office, city engineer’s office, city social welfare office, the contractor, the police, and some lawyer-members of the city council trooped to the site and started clearing the area.

Land development is supposed to be undertaken by PhilSouth but due to possible resistance from a number of families presently occupying the property, Remollo organized the team to enter the property along with heavy equipment and started toppling down standing coconut trees numbering about 70 and immediately fenced the area.

According to Remollo, judgement was final and executory since last year with the land title already in the name of NHA after buying the property at P25 million.

Due to resistance from a number of families who claim they are the original owners, NHA had to wait for the final decision.

Records will show that a certain Rogelio Linaban is the only legitimate tenant, but when it was sold by the Tale family to NHA, several others took position of the property.

In the judgement, Linaban was entitled to a P200,000 disturbance compensation for planting the coconut and mango trees to be received by his heirs after he died.

More importantly, Remollo disclosed the property had been converted from agricultural to residential and that the cutting of the coconut trees is with permits from the Philippine Coconut Authority (PCA).

The NHA housing site is designed to accommodate at least 300 families who were left homeless by typhoon Sendong and are temporarily residing in private lots in Junob, Balugo, and in other barangays. Remollo said COA is now questioning the city why it is leasing the private lots.

The mayor said if no action is taken this year, money for development of the land will go back to the national treasury and they will have to wait for next year to regain access to it.

Upon assumption into office, Remollo had offered the eight households to surrender the possession of the property and assured them of one house and lot each in the housing site. This was rejected by the claimants and instead hauled the NHA to court.

Aside from the mayor’s offer, the Tale family also offered them at least 2,000 square meters of lot where they can relocate in barangay Banilad but was also turned down.

With the final judgement, Remollo said his action will depend on the demeanor of the alleged claimants.

Commission on Human Rights special investigator Jess Cañete was requested and invited to be present during the clearing operation this morning to witness that there is no demolition of houses.