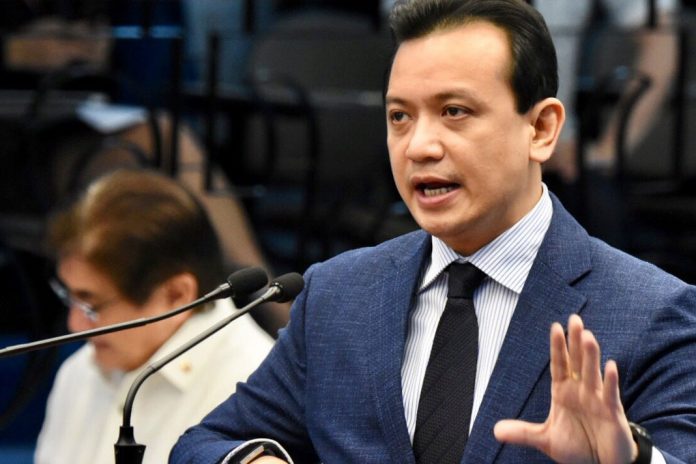 AMNESTY THAT NEVER WAS?

The No. 1 legal counsel of the government who has not lost a single case in the Supreme Court, Solicitor Gen. Jose Calida foresees the eventual arrest of Senator Antonio Trillanes for mutiny during the time of then Pres. Gloria Arryo and his eventual court martial.

The Solicitor General and Justice Sec. Mecardo Guevarra are guests of Dumaguete City as forum speakers at the start of “Civil Service Month” nationwide celebration. Calida is fraternity brother and former law partner of City Mayor Felipe Remmollo while Guevarra is also a fraternity brother of Remollo from the Ateneo Law Schoo.

Speaking over BAI RADIO’s “CROSSTALK” Wednesday, SolGen Calida said that the government found out that Sen. Trillanes has allegedly not admitted his guilt for mutiny nor complied with all the required application for amnesty after they were “forgiven” by the secretary of defense in behalf of then Pres. Noy Aquino for their mutiny at Oakwood during the time of Pres. Arroyo.

This claim was flatly denied by Sen. Trillanes and his legal counsels who showed media all such pertinent documents refuting the claim of government.

Impartial quarters including the Integrated Bar president and some legal minds from the Catholic clergy said that it will eventually be the court all the way to the top magistrate, the Supreme Court , to rule on the authenticity of the claim of both parties. Nobody can judge who is correct right now.

Calida, in the same exclusive interview, said that since the government prosecutors led by him can prove in court that Trillanes did not comply with requirements to such amnesty given by the secretary of defense in behalf of Pres. Noy Aquino to the Oakwood mutineers, then it follows that Trillanes never really availed of such amnesty. He is still a marine, therefore, his case is still open for trial by court martial since he was with the marines when he and other Oakwood military rebels staged the mutiny at the Manila Peninsula Hotel. Only the President can grant amnesty not the secretary of defense.

What happened after he was elected senator twice is a case of a “defacto incident.” Calida said Trillanes’ legislations, salaries, and public deeds are now considered as water under the bridge and will all be considered “de facto,” meaning it cannot be undone anymore.

But Trillanes is defended by a bevy of lawyers who claim that the COMELEC having accepted his senatorial run, and won, and that government never took interest on the case ‘until just now”, is a clear indication of political vindictiveness since Trillanes is now the no.1 critic of the President.

Two of the President’s staunch critics: Sen Leila de Lima is now detained at a government facility; and Lady Chief Justice Ma Lourdes Sereno is dismissed by quo warranto, and is out of office only recently. Now Trillanes.

In fact, Calida confirmed that Duterte’s “revocation” of the non-existent amnesty is in fact directed to the Department of Defense panel who implemented Aquino’s amnesty orders on the military mutineers.

Asked why Trillanes was the only one singled out among all mutineers, Calida said, “Well, there will be others who will follow soon.”

Another “test of the pudding” Calida said, will be the last-term candidacy of Sen. Trillanes in 2019 next year’s elections. COMELEC will have to decide whether to accept his senatorial candidacy nomination or not.

Asked why Trillanes was singled out by the Duterte government, Calida said: “We go after all kinds of law violators, whether senators, policemen, or civilians.”