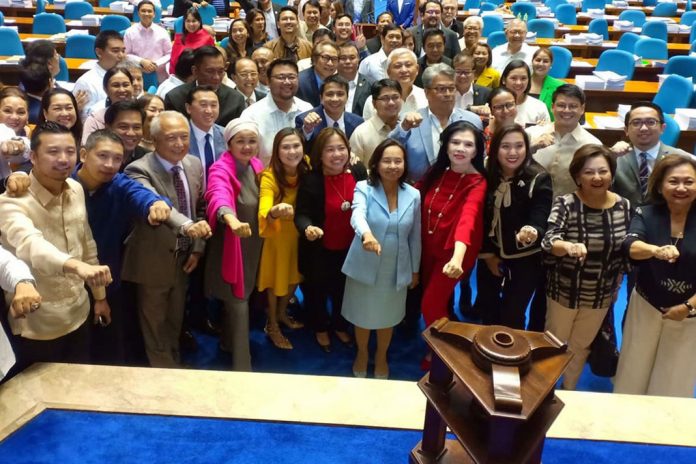 Skipping the vice president in the line of suc-cession in the draft federal constitution is bla-tantly political and personal. We are sure that if Leni Robredo were aligned with the adminsitratiion, the position of vice president not be dropped in the proposed and draft charter of the new Constitution authored by Rep Gloria Arroyo.

Knowing Gloria Arroyo up close, it I not her style much more as a woman to exclude the lady vice president in the line of succession. It only shows that Glo has changed, or that she had no choice if she has to resurrect politically it has to be at the expense of another?

To focus the debate on facts, hereunder is the transcription of the “Transitory Provisions” under Article XVII (17) and vote for yourself if you agree (or not) the provisions of the proposed draft federal charter.

Section 1. All branches of the Government shall continue to function in a transitory character until all their successors are elected or appointed and are duly qualified.

Sec. 2. The term of the President and the Vice President, which shall end on June 30, 2022, shall not be extended.

The incumbent President is prohibited from running as President in the 2022 elections under this constitution.

Sec. 3. The first national and local elections under this Constitution to elect the President, Vice President, senators, representatives, and local officials shall be on the 2nd Monday of May 2022. They shall assume office at noon on June 30, 2022.

Sec. 5. Until otherwise provided by a subsequent law, the seats allocated to party-list representatives shall be filled by election in accordance with Republic Act No. 7941 or the PartyList System for the May 2022 National Elections. Thereafter, Congress shall enact a law on partylist or sectoral representation under this Constitution.

Sec. 6. All existing laws, decrees, executive orders, proclamations, letters of instructions, and other executive issuances not inconsistent with this Constitution shall remain operative until amended, repealed, or revoked.

Sec. 7. All existing treaties or international agreements which have not been ratified shall not be renewed or extended without the concurrence of at least two-thirds (24) of all the Members of the Senate.

Sec. 8. All courts existing at the time of the ratification of this Constitution shall continue to exercise their jurisdiction, until otherwise provided by law. The provisions of the existing Rules of Court, judiciary acts, and procedural laws not inconsistent with this Constitution shall remain operative unless amended or repealed by the Supreme Court or the Congress.

Sec. 9. The incumbent Members of the Judiciary shall continue in office until they reach the age of seventy (70) years, become incapacitated to discharge the duties of their office, or are removed for cause or by the abolition of their office.