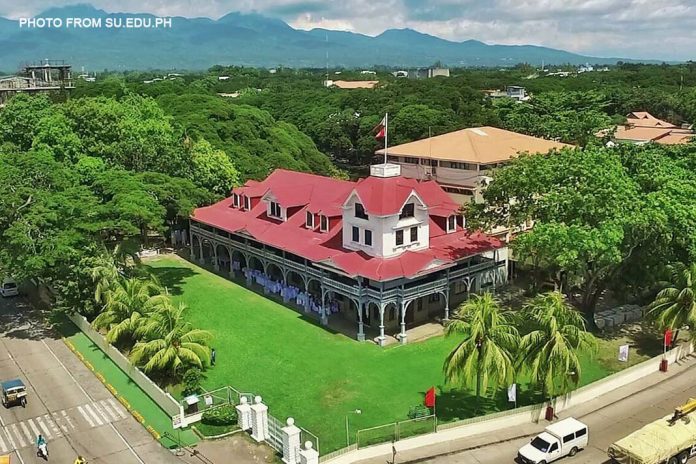 From an industrial school for 15 boys some 117 years ago in Dumaguete, to a coeducational university today, with a program of studies ranging from preschool and basic education to post-graduate and doctorate programs; from 15 boys to 10,100 students spread over more than 50 degree studies, Silliman University marks its 117th Founders Day on Tuesday August 28 in a 2-week celebration even as she proudly echoes this year’s theme “The Spirit of Service Lives on.”

Silliman’s first lady persident and the 13th in the line of succession since 1901 who was formally installed yesterday, Saturday, Dr. Betty Cernol-McCann thanked the Silliman community in honoring its founders and traced the origin of where this venture all began, in her remarks during such occasion, thus:

“I commend the Silliman University Elementary School for initiating this ceremony to honor a great figure in the history of the university. The opening remarks and the reenactment of the life of David and Laura Hibbard amply introduce us to the origin of our institution.

How did the school end up being in Dumaguete?

Arriving in the Philippines in 1899,Dr David Hibbard heeded the instruction to explore the southern part of the Philippine Islands to determine the best location for the school. His original points of destination were Cebu, Zamboanga and Iloilo. While in Cebu, a suggestion came to him to make a side-trip to Dumaguete. This turned out to be a side-trip that became the main trip. On his arrival, he was met by a Rev. Captain John Anthony Randolph, chaplain of the 6th U.S. Infantry Regiment stationed at that time in Dumaguete. Rev. Randolph later on introduced him to Don Meliton Larena, the town’s local presidente and to his brother Demetrio Larena, then the vicegovernor of the province. Hibbard got attracted to the place and decided to establish the school in the locality. He would later on write that the “beauty of Dumaguete and the friendliness of the people” helped in bringing about his decision.

Who is Rev. David Hibbard?

He received Theological Training at the Princeton Theological Seminary and went to obtain his Master of Arts Degree in Philosophy from Princeton University in 1896. Many years later, with an impressive record of educational service to our country, in March 1937, the University of the Philippines conferred upon Hibbard the degree of Doctor of Laws, Honoris Causa.

For three years after his graduation in Princeton University, Hibbard served as a pastor at a local church in Lyndon, Kansas. In February 1899, he accepted an invitation from the Presbyterian Board of Foreign Missions to serve in the Philippines which at that time was a territory under the jurisdiction of the United States following Spain’s defeat in the Spanish–American War.

But wait, who is Horace B. Silliman to which our University is named after?

He was a philanthropist who did business in pharmaceuticals who appeared at the office of the Presbyterian Board of Foreign Missions in New York City to contribute a sum of money to what he envisioned would be an industrial school for boys in the Philippines. Horace B. Silliman over the years had been a long and active supporter of schools and colleges in the US. Among such institutions was Hampton Institute of Virginia. His proposal to the Presbyterian Board was for an industrial school in the Philippines on the Hampton model. With Mr. Silliman’s encouragement and support, the Board decided to establish the school which we now call Silliman University.

So, what happened next?

On August 28, 1901, David Hibbard together with his wife Laura officially opened classes for the newly established Silliman Institute. About half a century later, Hibbard would recall that:

“There were fifteen boys that first morning. The equipment consisted of four desks about ten feet long, two tables and two chairs, a few McGuffey’s Readers, a few geographies, arithmetics and ninth-grade
grammars. I was President; Mrs. Hibbard was the faculty.”

Just a note on the role of women in education. Or, more particularly, the role of the wife of missionaries and pastors in the ministry of teaching, healing and spreading the gospel. Oftentimes, a wife’s role is subtly played; she is not made visible as she gives support to her husband – even as she performs way beyond the call of domestic and official duties of the spouse. In this marker, we don’t see a statue of Mrs. Laura Hibbard; she has though a portrait here bedecked with flowers. But we can just imagine that as the oneperson faculty during the early days of the Silliman Institute, her hands were definitely full. Look at the marker of Dr. David Hibbard and hear him say “I was the President.” And create in your mind a mental image of Mrs. Laura Hibbard as she did her job as the one and only faculty of those 15 boys.

Fast forward, 117 years later. From an industrial school for boys to a coeducational university with a program of studies ranging from preschool and basic education to postgraduate and doctorate programs; from 15 boys to 10,100 students spread over more than 50 degree studies; and still, proudly echoing the observations contained in a Board of Educational Survey Report in 1925, which in part states:

“The recitations heard by the Commission’s representative were most ably conducted and the spirit that pervaded the place was one of the finest he experienced anywhere.”

“The spirit that pervaded the place…” – that to me is the Silliman Spirit founded in the gospel teachings of Jesus Christ– the Way, the Truth, the Life.

Dr. Hibbard, first president, served for almost 30 years; the next 11 presidents served for a combined length of 86 years. Now, in our Founders Day celebration we assert in our theme “Silliman University @ 117: the Spirit of Service lives on!” Let us continue to be spirited in our service and emulate the dedication and persistence of David Hibbard, the first president, and of Laura Hibbard, the pioneering, indefatigable one-woman faculty!