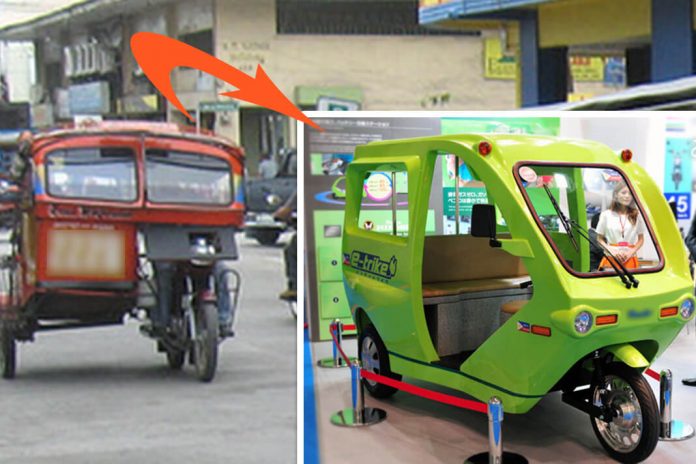 The Senate has filed a bill pushing for the replacement of 100,000 passenger tricycles with hybrid and full e-trike units, a measure aimed at cutting down the country’s carbon emission amid global efforts to curb climate change.

Senate Bill 1540  filed by Senator Francisco Kiko Pangilinan,  otherwise known as  the “Electric and Hybrid Vehicles Including Charging Stations Promotions Act of 2017”  is much welcome by commuters,  drivers and operators  in Dumaguete and Negros Oriental  because healthwise,  it  also aims to lower health risks from air pollution and increase, instead of decrease   income for the transport sector through tax incentives.

But the question is: can the drivers and operators afford the cost of one elecrtric tricycle unit? Will the government give incentives for its purchase to poor marginal drivers?  We hope so, if Congress wants the support of the people.

By  replacing some 100,000 tricycles  2,500 units here in Dumaguete and another 3009 units all  over this province   with electric or e-tricycles  this move can reduce the country’s gasoline consumption by 561,000 barrels a year, based on the Department of Energy’s estimates, the bill noted. Therefore cut down air pollution with drastic proportions.

Earlier, the Department of Trade and Industry also confirmed that  the proposed electric or e-tricycle project will increase  the  driver’s earnings as the e-trikes can carry more passengers in fact its  capacity is double the traditional unit and its power cost is up to 65 percent lower compared to fuel-powered one.

Two birds are hit with this, we not only resolve the issue of extreme traffic in our roads e-trikes   also  operate  in a manner that is sustainable and environment-friendly, as well as healthy for road users,” said Kiko Pangilinan its author in the explanatory note for his bill.

We hope the Duterte-dominated congress will not suppress this novelty and environment friendly e-trike bill even as Kiko  Pangilinan, who chairs the Liberal Party, said the bill’s implementation would include “time-bound tax incentives” for the manufacture, assembly, and use of hybrid and electric vehicles and charging stations.

Kiko who won with a big margin in Negros Oriental  in the last elections  also said that the measure seeks to exempt public utility vehicles (PUVs) from the mandatory number-coding traffic volume reduction scheme and provide drivers exclusive parking spaces at commercial establishments.

Also, it will  prioritize the processing of PUVs’ registration and franchise applications at the Land Transportation Office.

With the measure in place, the growing electric and hybrid industry could generate at least 150,000 jobs in manufacturing, trading, and sales of e-vehicles all over the country.

Air pollution could be significantly reduced too.

“We hope that the public and this administration-dominated Congress  would see these advantages and support this measure” said Pangilinan, the author of the electric tricycle bill.