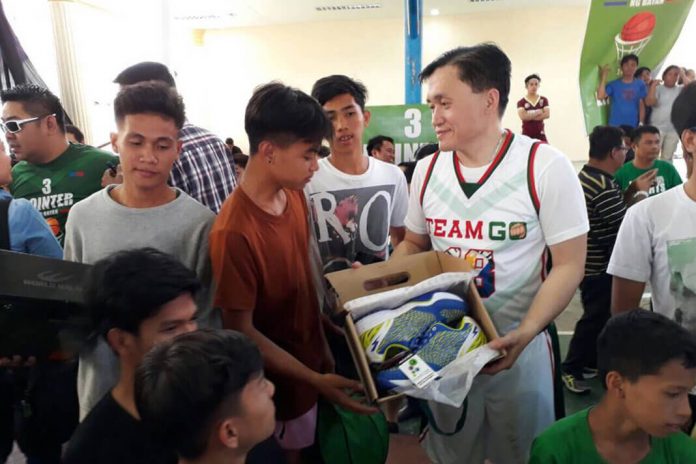 DUMAGUETE CITY — Special Assistant to the President Christopher Lawrence “Bong” Go has launched a nationwide search for the best three-point shooter on Sunday, in a bid to promote sports activities as a campaign against the three problems of corruption, criminality and illegal drugs.

The program, dubbed “3-Pointer ng Bayan,” was launched at the Verdant Covered Court in Las Piñas, where the city’s top shooters converged.

“This activity was created to help people stay away from drug use,” the presidential top aide said, adding that the sports program also aims to help combat corruption.

On why he decided to make it a nationwide sports program, Go said, “There are a lot of basketball players who run fast and are really shooters. It’s an opportunity for them to show off their skills at three points.”

The event started with a special 4-on-4 battle with four local players who were given an opportunity to play alongside PBA legends Alvin Patrimonio, Jerry Codiñera, Noli Locsin, and Willie Miller.

Capping the event was a special three-point shootout between Go, a member of the Malacañang-PSC team-up that finished runner-up to Senate in the recent UNTV Cup Finals, Alab Pilipinas star Dondon Hontiveros, and PBA legend Allan Caidic.

Current PBA stars Jonathan Grey and Jericho Cruz also showed up for the event and even engaged Hontiveros and Caidic for a shootout before Go’s turn to challenge the former star “deadshots”.

While the Las Piñas event was the formal launching of the shootout series, Go said the “3 Pointer ng Bayan” actually started in Lanao with a future stop in Laguna being set up.

“This will go around the country. Whoever likes it, we’ll go there,” he added.

The program will be making the rounds of 113 cities in the next few weeks.

Go, the President’s most-trusted aide, has been considered as a possible senatorial candidate in the 2019 midterm elections by the ruling political party, PDP-Laban. (Ivan Stewart Saldajeno/PNA)