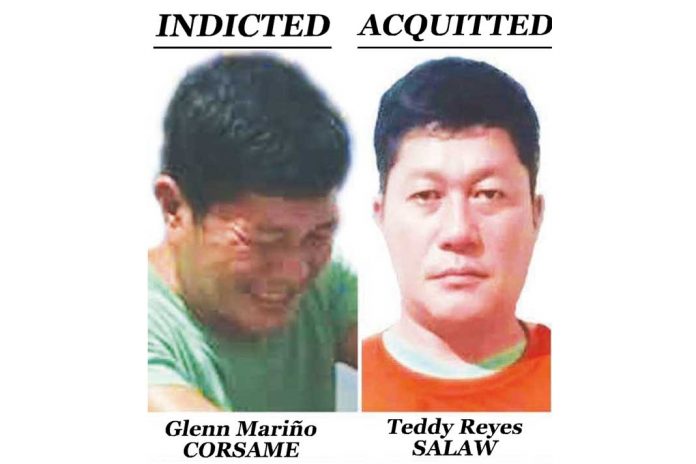 Chief city prosecutor Joseph Arnel Zerna has approved the dismissal of the murder charges of Teddy Reyes Salaw, a businessman, but allowed the filing of information on suspect Glenn Marino Corsame for the murder of broadcaster Dindo Generoso on November 7.

Complainants were PSSg Harry Dumaguit and PCpl Jay Morly Alic who were in hot pursuit policemen and consequently effected the warrantless arrests on the duo.

“Wherefore premises considered, and after evaluating the evidence submitted by the parties, the complaint filed against respondent Teddy R. Salaw is considered dismissed for an invalid warrantless arrest with regards to the shooting incident of Mr. Dindo Generoso.”

“Had he been charged for illegal possession of firearms, the reason for which he was arrested without a warrant, it is possible that said arrest would have been validly made.”

“The undersigned finds the warrantless arrest of respondent Glenn M. Corsame to be valid for conspiring with possibly 5 other persons in committing murder. It is recommended that an information be filed before the proper court.”

“The Chief of Police of Dumaguete City Police Office is hereby ordered to release from his custody the living body of Teddy R. Salaw, unless he is detained for some other lawful cause.”

The resolution concluded as follows:

“….with regards to respondent Glenn M. Corsame, PSSg Dumaguit already identified him to be present before the incident of the shooting of victim Dindo Generoso. In other words, PSSg Dumaguit already had personal knowledge of facts and circumstances indicating that respondent Glenn M. Corsame was involved in the shooting incident of the victim Dindo Generoso and part of the conspiracy to commit the same.”

“Therefore, the arrest of respondent Glenn M. Corsame on November 7, 2019 at around 6:00 in the evening was valid because even without the invalid testimony of respondent Teddy R. Salaw and the invalid evidence they gathered, they still have reason to believe and personal knowledge that he committed the crime,” said prosecutor Bokingkito in his Resolution last Tuesday.

As documented on CCTV and reviewed at the city hall command center, police probers confirmed that Corsame alighted from the Strada and walked south. He then met two people – one an alleged policeman – who was waiting at Why Not? Restaurant. After briefly conversing with one of the suspects, Corsame returned to the Strada and followed the would-be shooters near the scene of the crime, according to the police.

Presidential Task Force on Media Security executive director Usec. Joel Egco, former president of the National Press Club, came to Dumaguete for the roadshow caravan of the Presidential Communications Office under Sec. Martin  Andanar over the weekend. He reiterated the administration’s call to ensure the safety of journalists.