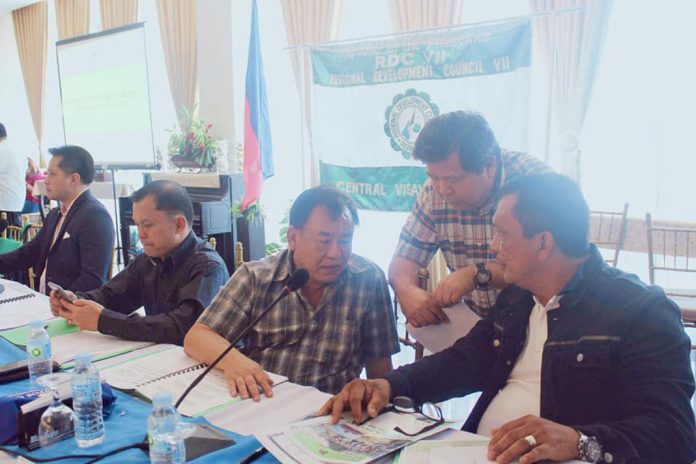 The Regional Development Council deliberated and endorsed programs and mega-projects worth P66.7 billion for funding by the national agencies during a recent meeting held in Dumaguete City. Mayor Felipe Antonio Remollo, Siquijor Governor Zaldy Villa and Governor Roel Degamo (in a huddle right) urged the membership of RDC to seek congressional amendment so that funds can be downloaded for school building projects direct to the recipient Local Government Units in the provinces of to speed up the implementation.

RDC is mandated to coordinate the regional investments programs for the provinces of Negros Oriental, Cebu, Siquijor and Bohol as well as cities in Central Visayas, review, prioritize and endorse to the national government the annual sectoral government programs of the region, annual budgets of the regional line agencies and state universities and colleges.

Traffic lights after CCTV
By Jennifer C. Tilos
Dumaguete City intends to install traffic light system in major street intersections within the next nine months after its CCTV project implementation.
“The installation of traffic lights system is the next big project of Mayor Felipe Antonio Remollo to manage the traffic in the Central Business District and to ensure that enforcers will focus more on penalizing than actually manning traffic,” releases from the Dumaguete City Hall said. Remollo recently directed members of the Bids and Awards Committee and Technical Working Group to conduct a study tour in Cebu City, Minglanilla and Lapu-Lapu City so they can make a recommendation which traffic light system will be most suitable and appropriate for the city.

Spiritual values for family
By Roi Lomotan
Representatives of religious groups in Dumaguete City underscored the impor-tance of preserving spiritual values in nurturing family relationships.
This was highlighted during the Kapihan sa PIA forum held Sept. 24 to mark the observance of the National Family Week. Officials and members of church groups noted that church teachings and reinforcing the spiritual aspect are also essential in strengthening family ties and fortifying the basic unit of the community.

Avert fuel price hikes
Department of Energy (DOE) Secretary Alfonso G. Cusi announced on Oct. 4 that the agency is exhausting all options to mitigate rising fuel prices and called for the practice of fuel efficiency measures.
Based on oil consumption data, the Philippines is a net importer of oil products. This means that the country’s fuel supply is generally sourced from abroad, making us vulnerable to changes in international oil price markets. The Energy Chief emphasized, “We’ve been exploring higher and expanded fuel discounts to public utility vehicles, looking at nearby countries for lower priced supply and even went to unpopular options to ensure that consumers are protected from the impact of this global price situation.”

Fish Right’ Negros pushed
By Jennifer C. Tilos
The dwindling supply of fish in some parts of Negros Island’s major fishing ground is now up for rehabilitation.
Silliman University (SU) together with University of Rhode Islands and University of the Philippines (UP) are putting into action the ‘Fish Right’ program to promote the right fishing and improve the struggling fishing industry in the island as well as the country’s food security. The over population, coastal degradation, destructive fishing practices and overfishing are some of the causes cited in the decline of fish production in the region, said SU former President Dr. Ben Malayang.