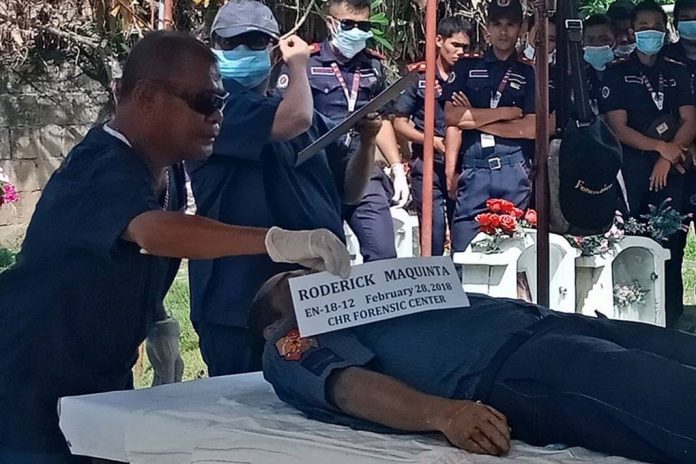 DUMAGUETE CITY – The Commission on Human Rights (CHR) has exhumed the remains of a police officer who was killed during an anti-drug operation on January 9 this year upon the request of his mother Perlita Maquinta. Exhumed by forensic experts from the CHR central office in Manila headed by Dr. Ludivino Lagat was the cadaver of PO2 Roderick Maquinta whom the police said tried to shoot it out with police operatives from Dumaguete during a buy-bust operation at the entrance gate of the Holy Child Hospital.

CHR special field investigator Jesus Cañete said the autopsy is conducted not as witch hunt but to determine the trajectory of the bullets that entered the body of the suspect, to recover if there are slugs in order to identify what caliber of firearm was used, and to determine the possible position of the shooter and the victim in the hope of finding enough evidence that is required in the filing of appropriate charges against anyone.

According to Cañete, the CHR cannot solely rely on the police blotter and verbal pronouncements of the police because of a standing order and memorandum from the Office of the President not to provide documents to the CHR in situations like this so they are conducting their own investigation upon the request of the family.

He said that in the absence of the police investigation report, the CHR will be forced to file the information based on their own findings including the findings of forensic experts and so the burden of proof is shifted to the concerned operatives to justify if the former police officer was killed as a matter of self-defense or not.

Although not official, Cañete said Maquinta’s bullet wound on the left temporal portion of his head did not pierce through the skull which is indicative that the bullet may have hit a hard object first and ricocheted. Two other bullet wounds were found in the abdomen and in the chest.

Meanwhile, the parents refused to be interviewed, chiding media for not getting their side of the story when it happened.  They also continue to deny that their son is a notorious criminal hence their continuous attempt to seek justice for his death.

Cañete said the investigation will center on whether there was violation of the rule of law in the death of Maquinta or not.  He also said that if police operatives concerned will invoke the memorandum circular issued by the office of the President, the CHR has no other recourse but to submit their findings to the court.

The same team of forensic experts is also scheduled to conduct an exhumation of the cadaver of a member of the SCAA who was also killed by armed men in Sta. Catalina.