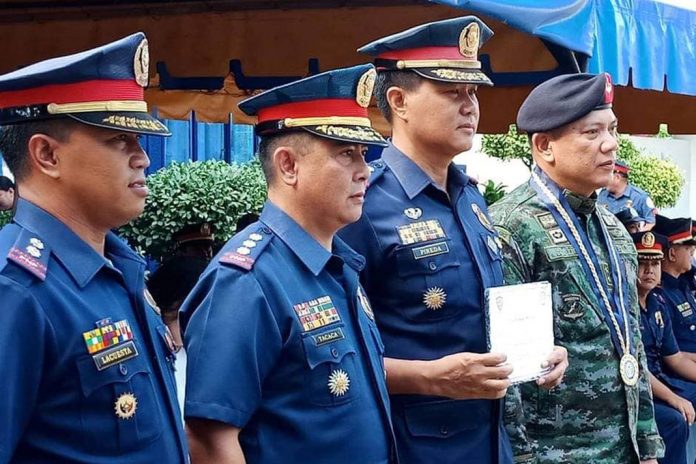 This regional director of the PNP awarded top performers in what he called a sentimental journey because he started his police career here and ended on top of the regional police totem before he bids adieu to the police service.

In his message, Dir. Talino said his presence today is not just as guest of honor but part of a sentimental journey before he retires in January.

The SAF director was the commanding officer of the 2nd special action company of the then Philippine Constabulary-Special Action Force in 1989 before various designations in both administrative and operational functions.

He was hoping the awards and recognition will inspire and motivate the rest of the policemen to work harder to serve and protect their respective constituents.

The Negros Oriental Provincial command is Talino’s first visit to his previous assignments as a young lieutenant before retiring in January 2019 even as he was not an organic member of the then Philippine Constabulary-Integrated National Police (PC-INP) commander headed by then Lt. Col. Ricardo de Leon because he was the first commanding officer of the 2nd SAF deployed in the province.

After more than three decades in police service, Dir. Talino said, “We are mere passersby and, in due time, we shall all retire and leave this institution. But as we we leave, we shall all bring with us different stories of sacrifices and heroism that we will reminisce and treasure for the rest of our lives.”

With the statement, the SAF director encourages everyone to uphold the commitment to serve and protect the country and its people with outmost integrity and service above self.

Talino wanted the police to bear in mind that service and reputation are paramount in their profession. He told the men in uniform not to lose the idealism that was imbued in them by the PNP because such idealism will carry them through thick and thin until they will retire.