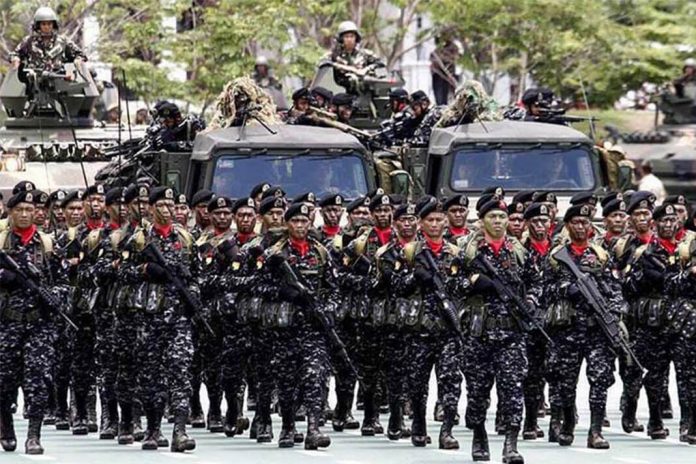 There is an old Latin saying which says “if you seek peace prepare for war.”

It is generally agreed that the Philippine armed forces is one of the weakest in the world. This is an anomaly given that this country id the twelfth biggest in the globe in terms of population. The question is why is this the case?

There are many hypotheses advanced. One obviously is lack of funding from a niggardly congress whose appropriation for the armed forces in terms of a percentage of GDP is lowest in the region. Another is that the mutual defense agreement with the US has developed a state of dependency and a culture of mendicancy on the part of the government who still hopes that the 1951 treaty will produce a credible defense force which can deter any external threat. Indeed not even the hand-me-downs and second-hand equipment from the US has been matched by the Philippine government in the absence of an existential external threat since the end of the Second World War, Unfortunately the internal threat have been real as evidenced by events in Mindanao which has been turned into virtual war zone with firefights continuing unabated in the last three months.

It is now conventional wisdom among security think tanks that the lack of a comprehensive security plan is behind our lack of preparedness for war. Whatever happened to Marcos’ self-reliant defense model, the proceeds from the sale of government lands and the ROTC?

Perhaps we need a new mindset. National security is not only the responsibility of our military forces of some 150,000 that are under armed, undertrained and underpaid, as shown in the Maute campaign. It has to resort to begging from allies for combat planes warships and even patrol boats for the coastguard. The reason for the protracted war in Marawi according to the military is not only the inadequacy of intelligence or the lack of proper training in urban warfare but more importantly the lack of such basic hardware as tanks and armored vehicles needed to crush the heavily embedded enemy in superior vantage positions.

What has not been inculcated among our citizenry is the national security is the responsibility of all able-bodied members of the community. While it is true that the heavy-lifting is the task of the Philippine armed forces who are the first responders in case of invasion, it is also true that a citizen army to backstop the armed forces is the norm in most countries who have trained reservists that can be mobilized posthaste in any crisis situation as first responders to armed conflict or natural disasters. This is true in smaller nations the like of Switzerland, Taiwan, Singapore, Israel and neighboring countries. It is even truer in bigger nations in Europe and elsewhere. Indeed national security must be made participatory and no able-bodied citizen can shirk this obligation, hence the call for the revival of the ROTC and the civilian army concept. Can you imagine if only ten percent of the population in this country of 100 million can be called to arms. We would have the biggest militia in the world?

Another consideration fathered by Marcos was a self-reliant armed forces that can manufacture even part of its weaponry. If we can manufacture more of that exportable paltik from Danao, and patrol boats from our baraderos or shipyards in Cebu and Bataan we can be less dependent on our allies for supplies. If we were able to build the circumnavigating galleons from Cavite shipyards why cannot we do the same today? Informatively we are now building very heavy ocean-going cargo and container ships for neighboring countries like South Korea in Bataan shipyards. Yes, indeed we have all the skills to build a modest but credible military industrial complex to service our self-reliant armed forces but do we have the political will to do so?. In fact as we write, superpowers like China and Russia are offering to put up manufacturing plants for war materiel in the country.

But first of all let us get rid of that mendicant attitude and the culture of dependency rooted in our military alliance with our former colonizer. We are no longer the little brown brother who can be supplied only with toy guns. As we pursue our independent foreign policy as mandated by the constitution we must as the saying goes seek peace but prepare for war so that as the anthem goes ne’er shall invaders trample our sacred shores!