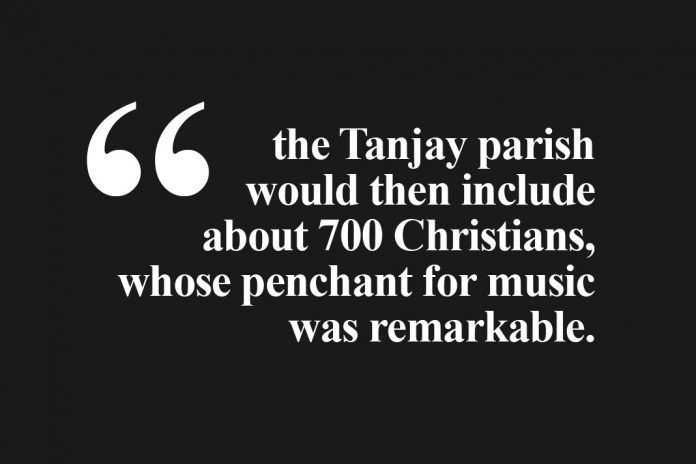 The parish of Tanjay in the 1600s covered a large territory in eastern Negros Island, with a population of some 8,000 persons. Bishop Pedro Agurto of Cebu, who had jurisdiction over all the Visayas, asked the Jesuits to take over the parish. For lack of personnel, they declined but only sent Father Gabriel Sanchez for some parochial visits.

Fr. Sanchez related on 12 November 1600 how “with music and other tokens of joy” he was received with enthusiastic welcome by the Tanjayanons. “I was chosen, and it pleased our Lord to give us a good foothold in the island; on the very first day we found all the people gathered on the river bank, awaiting us with music and other tokens of joy. We went to the church, and there I began to address them and discuss our holy faith.”

That Tanjay before the 1600s had already a church of its own is indicative of a growing Christian community. Its number as estimated would reach 500, while the majority scattered in this large area of eastern Negros Island clearly were still pagans. Despite his being frail, Fr. Sanchez never suffered a breakdown in the town notwithstanding so great a missionary enterprise on his hands.

“I told them about the One God, Creator of all, whom Christians know and adore; I told them that all other gods and idolatries and errors and superstitions were pure inventions and the work of the devil. On Monday I explained the mystery of the Trinity as much as possible. On the third and fourth days I instructed them in the knowledge of Jesus Christ our Lord, and His most holy passion and life, and other articles of faith, accommodating myself to their capacity.”

After everything had been said and done in his first visit to Tanjay in the early 1600, Fr. Sanchez “baptized many people including many children” which can be interpreted in the light of other reports to be between one to two hundred persons. In this case, the Tanjay parish would then include about 700 Christians, whose penchant for music was remarkable.

“Your Reverence should have seen the change that came over them on the second and third days, when they became filled with the thought of God, trying to learn and understand His holy law, and talking about the things I had preached. Their houses seemed like Churches from the sound of the singing of the Christian doctrine.”