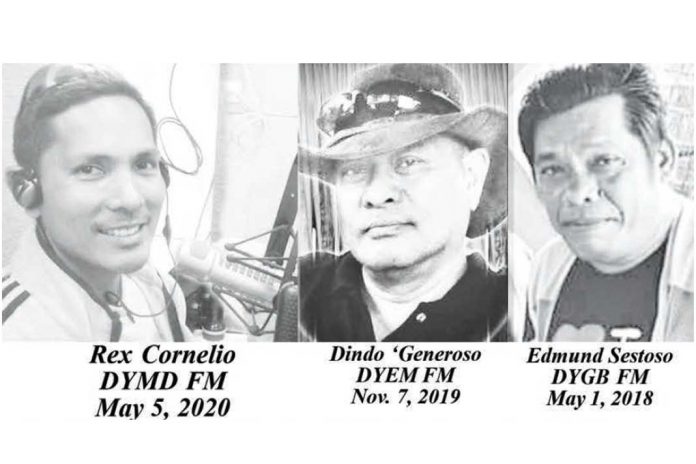 The City government has raised P1-Million in  taxpayers’ money as bounty for information  leading to the capture of   the killers and mastermind of not only the most recent media victim Rex Cornelio Pepino (May 5) but also other media victims like Edmund Sestoso  of DYGB FM May 1, 2018  and Dindo Generoso of DYEM FM 7, 2019.

The city council Wednesday has approved a resolution asking the mayor to offer P1 million for Rex Cornelio Pepino and the other media practitioners. Mayor Felipe Remollo said he will not hesitate to approve such  P1-Million bounty resolution. He even wants it bigger.

This P1-Million bounty is also for the guarantee of the media practitioners’  constitutional  mandate of the freedom of speech, and freedom of the press.  Presiding officer and Vice Mayor Alan Gel Cordova said that if this is not done, “dili ra kamong media ang magabantay , kami usab nga mga politiko and also  the public at large.

Through such resolution, the council is hoping that witnesses and informants will emerge, so that  justice will be served not only to Pepino but including the deaths of Sestoso and Generoso. The commonality of the crime is anchored  generally on politics.

Also, the city council in its regular session Wednesday, had approved  a resolution to ban helmets covering the faces of users,  and  for the repeal of the helmet law and allow local governments to pass their own helmet requirement ordinances. This was approved on mass motion in through the chair of the committee on rules Councilor Karissa Faye Tolentino Maxino.

Cordova said that although the movements of suspects were recorded via the CCTV cameras, but  the suspects are using full face helmets, including the shooters of Sestoso and Generoso. Thus  even with a sophisticated multi million cctv system,  the purpose is defeated by way of using the helmets that cover the faces of users..

In line with  this development, the city council today had requested the three congressmen of the province, namely, Cong. Josy Limkaichong of the first district, 2nd Dist Rep. Manuel Sagarbarria and 3rd district solon Arnie Teves to initiate moves in Congress for the repeal of the helmet law and allow LGUs to pass their own helmet requirement ordinances to suit the needs of the community. Cordova said it is sending the same resolution to the Senate president and the House Speaker for a reconsideration.

MEANWHILE, Vice Mayor Cordova is seriously considering  the idea for the national government to draft  a national bounty hunting law, with cash rewards for individuals who can catch suspected killers or even kill them.

Cordova said this is  a tool, that is being used by other countries to motivate informants and witnesses to come out  with info even if their identities will be withheld.. It will be recalled that the vice mayor, during his first term in office as city councilor, made some sort of forecasts that ten years later which is 2020,  people will take the law into their own hands.

The  city officialdom was shocked upon hearing the execution of broadcaster and commentator Rex Pepino aka Rex Cornelio, anchor of a station produced commentary “Pukpukin Mo Baby” aired 6-8:00 pm over DYMD-FM on or about 8:30 o’clock Tuesday night at the North National Highway in Bantayan, the third mediaman to be executed in two years-time, since the death of Edmund Sestoso on May 1, 2018, and Dindo Generoso on Nov. 7, 2019.

Dumaguete City Mayor Felipe Remollo along with Vice Mayor Alan Gel Cordova, some councilors and the police immediately went to the CCTV command center for a review of the CCTV footage, to find out that  Pepino was being tailed by the suspected gunmen who were riding in tandem on board a motorcycle without a plate number, and wearing face masks and helmets.

Based on the CCTV account, Pepino together with his wife Colen dropped by the DOH Pharmacy in Daro, adjacent to the Mercury Drug where he stayed for more than 5 minutes while a man was standing outside as if waiting for a ride, while the riding in tandem suspects proceeded to the area in front of the provincial hospital where they waited for few minutes. The same CCTV footage showed the gunmen  came back three times to check Pepino’s whereabouts.

As soon as Pepino and wife boarded their motorcycle and proceeded north,  the man believed to be the look out apparently contacted his cohorts and then boarded a motorcycle whose side car number is now under investigation.

It was unfortunate that the CCTV near Citi Mall where the incident took place, was not working because on March 12 this year, it was reported to the command center that a concrete mixer hit the post and damaged the same  but the replacement is not possible because it was during the time that personnel from Cebu could not anymore come due to the declaration of the community quarantine.

Remollo called on the police to exert an all out effort to bring Pepino’s shooters to justice in saying, despite how vocal or bombastic  a mediaman is, he does not deserve this kind of judgement. “Tambag pod nako sa media,  you can promote the personality that you like but it should not be at the expense of the others that you dont like or hated most.

Recovered at the crime scene are five spent shells for Cal. 9 mm pistol and a slug believed to be that of a hollow point ammunition of the firearm. Pepino sustained gunshot wounds in the head, chest and arm and declared dead on arrival on or about 9:11 o’clock Tuesday night at the Silliman University Medical Center.