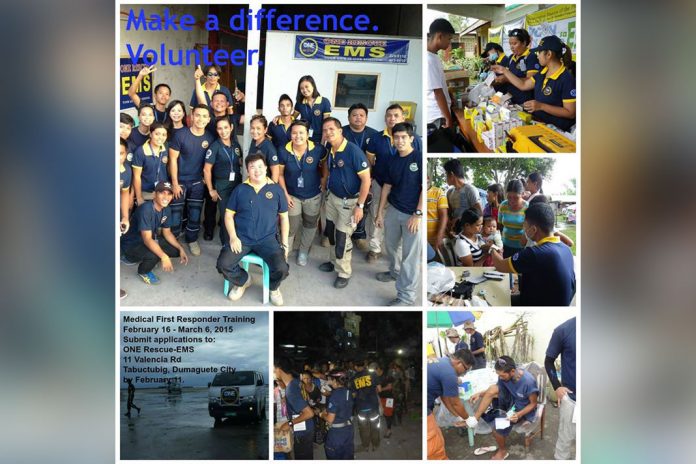 One Negros Emergency Rescue-Emergency Medical Service otherwise known as ONE RESCUE-EMS in Negros Oriental is enhancing its capacity to respond to emergencies in Negros Oriental with additional two ambulances forthcoming donated by the Northern California (NORCAL) Ambulance Service through the Northern California Silliman University Alumni Association.

A memorandum of agreement for the donation of two ambulances was inked yesterday at the Guy Hall of Silliman University between the donor Dr. Gerald Nazareno of NORCAL ambulance service, Dr. Gary Nazareno of NORCAL alumni association, and the donee Silliman Universit president Dr Betty C McCann. Signatory to the MOA is the beneficiary Atty. Riodil Montebon, president of ONE RESCUE-EMS and witnessed by some members of the board. Original members of the ONE RESCUE-EMS board of directors include Fr. Enrique Balongag, vice president, Dannah Fortunato as secretary, Arthur Chua as treasurer and directors Roy Cang, Dr Kenneth Coo, former SU president Ben Malayang III, Victor Vicente Sinco, Felix Sy, Edward Uy, Conrad Yulo and president Atty Riodil Montebon.

ONE RESCUE-EMS was officially registered with the Securities and Exchange Commission wayback January 2008 as a foundation. A brief history of ONE RESCUE-EMS showed that the concept of having an emergency medical service (EMS) was initiated by Edward Lee of Lee Plaza who wanted to establish a sister unit of the Emergency Rescue Unit Foundation (ERUF) Inc of Cebu.

From 2009 up to present it has trained three batches of volunteers on emergency medical services to include basic life support, among others. ONE RESCUE-EMS’s first ambulance was bought by the family of Edward Lee, the second ambulance was courtesy of the Sy family with 1 st Dist Rep. Jocelyn Limkaichong and the Lee family.

Dr. Coo disclosed ONE RESCUE-EMS’s uniforms and other medical equipment in 2017 were donated by his classmates twin brothers Gerald and Gary Nazareno of NORCAL ambulance service. Records of ONE RESCUE-EMS showed that it has increasing medical and trauma calls from 2016 up to the present, including emergency and transport calls.