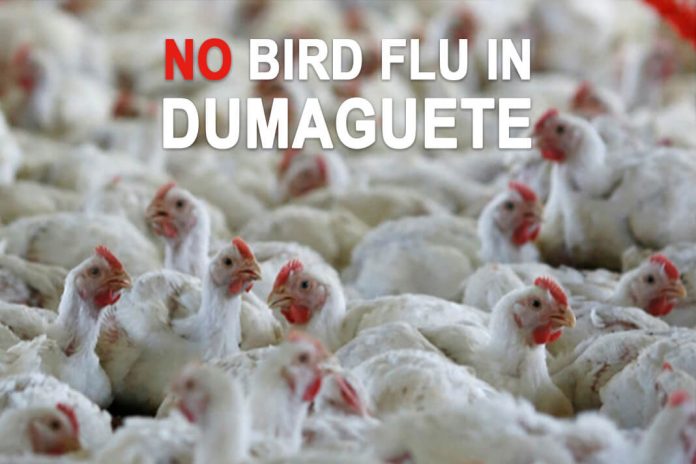 City Veterinarian Dr. Lourdes Socorro revealed that based on the thirty (30) samples taken from live, healthy and dying chickens last week, none of those tested yielded positive of the avian flu virus declaring that there is no bird flu in Dumaguete City.

The samples were taken from thirty (30) chickens and fighting cocks from the cluster of households in Barangay Talay and Barangay East Balabag in Valencia and sent to the Regional Animal Disease Diagnostic Laboratory.

Although five (5) of the sick chickens eventually died, yet they were thought to have succumbed to new castle disease (atay or dongoy) an endemic and common illness.

“The management of a nearby poultry farm with approximately 40,000 heads promptly vaccinated the chickens,” Socorro reported.

If at least one of the birds tested positive of the avian virus, authorities would have declared a quarantine zone of 1 kilometer radius from the source with all chickens set to be culled. A controlled zone of 7 kilometer radius would prohibit the transfer or marketing of the chickens within it.

Despite the result showing that there is no bird flu in Dumaguete City, the DOH still advise that the public should avoid getting exposed to live birds that could have been exposed to bird flu. Those who do work with live birds and other poultry products should wear proper protective equipment and practice regular hand-washing.