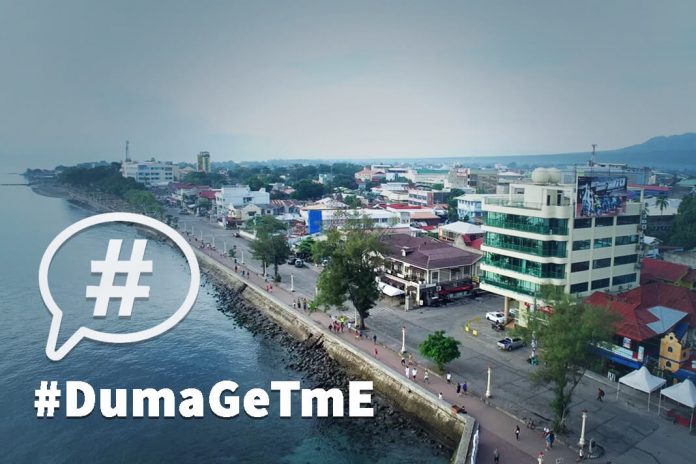 Dumaguete city is getting a new brand name and it’s called : “Duma GET ME” which some call as a long shot attempt to dislodge what has internationally stucked as “I Love Dumaguete”. Dumaguete City Mayor Felipe Antonio Remollo exclaimed the new signage will soon be installed at the boulevard. The mayor told reporters that Dumaguete, Negros Oriental #DumaGeTmE is not just an empty phrase that is taken out from nowhere but was a product of a study by many people including the historical council for quiet sometime.

The iconic all weather design will be launched second week of September during the Sandurot festival to replace the “I love Dumaguete” signage of the previous administration. But what has the past political administration got to do with a new branding campaign #DumaGeTmE? Forget the past, face the future and make it better, said one taxpayer.

In a speech during the 50th anniversary of ASEAN, at the foot of the city’s landmark which is the Campanario de Dumaguete last night, Mayor Remollo said the activity was a previous of his administration’s collective desire to make the city a truly heritage destination.

Todate, the city is known worldwide as the gateway to so many beautiful tourist destinations in the province including Cebu and Siquijor, like the world-renowned Apo Island, Lake Balanan, Twin Lakes of Balinsasayao, dolphin watching in Bais and Manjuyod, Butanding watching in Oslob, Cebu as well as the famous beaches in Siquijor Island, but with the establishment of the regional museum in Dumaguete as a repository of archaeological findings as far back as 500 BC, a refurbished plaza plus the lighting of the iconic belltower at the Cathedral church, Dumaguete City is a tourist destination in itself as a heritage city.

According to Mayor Remollo, the restoration of the old city hall will start in November this year which is funded by the national government at P50 million.

The mayor said many things are happening in Dumaguete and he believes in the restoration of the past and honoring the city’s past. Knowing our past mistakes is important because it will guide us to the future, Remollo told last night’s crowd. He said Dumaguete was fortunate to be one of the five sites chosen among 63 local government units all over the country to light up a historic and iconic structure. Remollo said Dumaguete is not only a city of gentle people but a place of educated and cultured people.