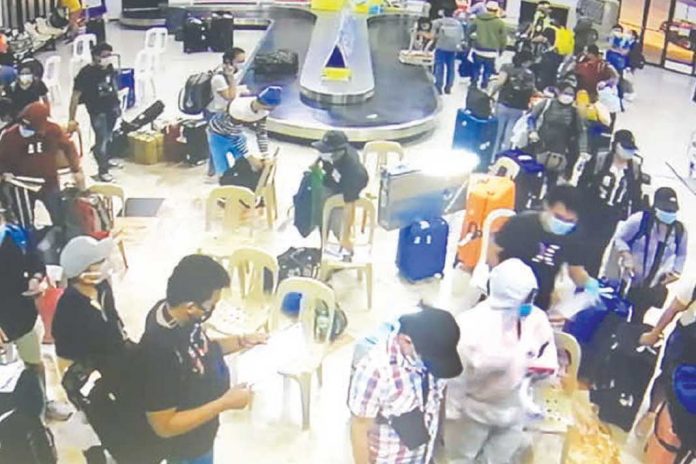 More and more over seas Negrense workers are coming home as part of the “balik provincia” policy of the administration even if Manila OFW employers have to charter flights to bring home some 20,000 OFWs all over the world with more coming.

So who are coming home?

Just last Tuesday (see photo) close to a hundred OFWs from Negros Oriental flew by special sweeper flight of Philippine Airlines which landed at the Sibulan airport. In such a short notice.

The photo depicts them on quarantine process after which they were wisked to a local hotel until after 14 days of quarantine. The LGU from their towns to pick them up here in the city.

As of Thursday, the Dumaguete City Inter- Agency Task Force, chaired by Mayor Remollo, reports that there are now 101 Person Under Monitoring (PUMs) by the City Health Office.

Among them are 21 Overseas Filipino Workers, 23 Locally Stranded Individuals who recently arrived and are either under quarantine in the designated hotel facility or the City’s Community Isolation Center for strict monitoring by the health workers.

None of the PUMs have presented Influenza Like Illness while under quarantine. Six other PUMs have also completed the mandatory 14-day quarantine without any symptoms of the dreaded virus and have been released.

Mayor Remollo expresses hope that henceforth the responsible national agencies will be able to communicate accurately the number of returning residents and actual date/time of arrivals so that adequate personnel and vehicle will be deployed by the City’s Inter- Agency Task Force COVID-19.

Several vehicles, one of them a bus, are prepared to pick up the returning residents from the airport, seaport or terminals, who shall be assessed and placed under the mandatory 14-day quarantine at a government isolation facility or designated hotel.

Mayor Remollo confirms that returning residents are required to present a Medical Clearance Certification issued by the City/ Municipal Health Officer and Travel Authority issued by the JTF CV Shield of place of origin upon arrival.

Meanwhile, repatriated OFWs must obtain negative results of the mandatory RE-PCR testing prior to their transport back to the city.

Provided that accurate and advance information are given, the City Government is fully committed to process, accept and quarantine all returning Overseas Filipino Workers and Locally Stranded Individuals.