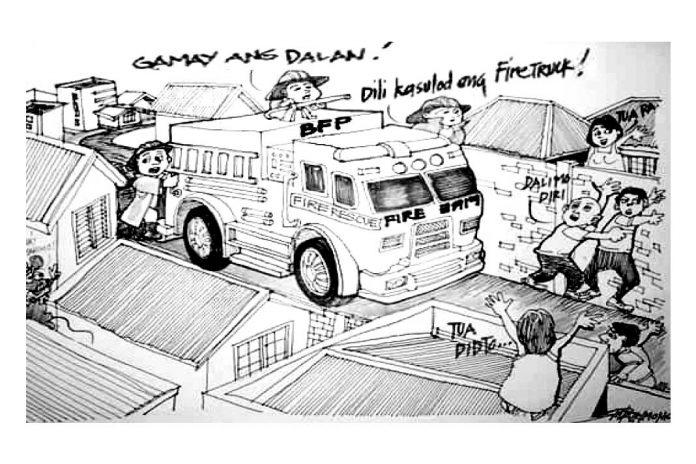 Assuming there is enough water in the pipes of the Water District— as it should,— this city needs more fire hydrants especially in crowded housing areas whose narrow roads block firetrucks and ambulances in cases of emergency.

Two hard lessons were recently learned in Dumaguete as we mark FIRE PREVENTION MONTH, and we hope —God forbid— no third hard lesson to learn: the fires of Looc and Gumamela in Calindagan, both areas of crowded houses of light materials with no access roads except for small two-meter pathways enough for pedestrians and two motorcycles to pass.

Result: 18 and 59 houses, respectively, were leveled to the ground each costing no less than a hundred thousand pesos, 600 homeless, 59 infants.

Easily 7 to 10 Million pesos worth of properties of middle income families burned to the ground. Worse, most of them could not bring anything because it was dawn, it was dark and not enough road for panic-people to rush out their things. In short, the 500 or so victims and 59 infants ended with virtually nothing. Thanks to responding citizens and the City government who gave assistance. Senator Bong Go also came to bring help. He also came to help secure funds to rebuild the burned old city high school building even if until now the money is not yet released we donno why.

Lesson learned: the City Council and Liga ng mga Barangays, resolved to pass an ordinance, requiring all housing subdivisions and compounds to install at least two fire hydrants especially when their roads are too narrow for fire trucks to enter as in the Looc and Gumamela fire incidents few weeks ago.

Barangays must also acquire portable high pressure water pumps to initially respond to a starting fire hoping it will not spread to the neighborhood, before fire trucks arrive with their water hoses squeezing into narrow pathways.

Our thanks to the firemen who did a relatively quick response to two most recent fires in the city, and their auxiliary tankers escorts.

IT is our hope that as the City grows, more effective working fire hydrants will be installed for the neighborhood in order to initiate some quick response in times of emergency.