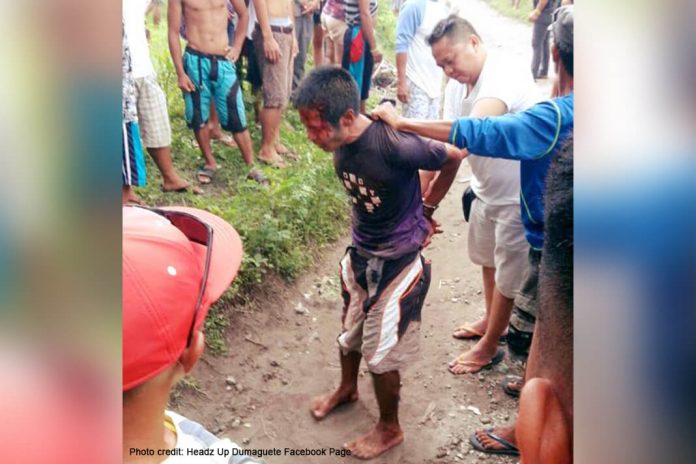 A mentally-deranged individual virtually manslaughtered his own 86-yr old mother, allegedly ate her flesh, and indications showed he raped her own mother. Relatives, and neighbors strongly suspect the perpetrator by his  dastardly murder, was a drug addict.

These were initial results of the investigations conducted by the police based on testimonies of eyewitnesses who were in the vicinity  of the house of victim Josefina Manaban, 86 years old, a widower, resident of Purok 5, Barangay Boloc-boloc, Sibulan.

Police investigator PO3 Earl Ahmad Diaz identified the suspect as Roger Manaban, 52 years old, married who was caught and arrested  by the police in possession of the murder weapon with a bloody shorts, t-shirts and face.

According to eyewitnesses, the suspect stabbed her mother several times, slashed her stomach and face, ate the flesh and threw body parts outside the house.

PO3 Diaz said, a medico legal investigation is being conducted to determine if the victim was raped according to claims of eye witnesses, while the suspect was arrested half naked as well as her mother.

Parricide charges is being readied against the suspect, Diaz pointed out.

Meanwhile, the victim’s daughter Violeta dela Peña who lives in Piapi beach was bringing food for her mother when he noticed a very unusual behavior of her elder brother who arrived on or about 5:30 o’clock Sunday afternoon at the residence of their mother in Boloc-boloc, Sibulan.

She added, the suspect has a family in Davao with two children, returned to Negros Oriental a year ago, and has no permanent address and jobless , simply transferring from one relative’s house  to the other.

The police, on the other hand, is till looking into records if the suspect is involved in illegal drugs while daughter Violeta strongly believes he addicted to illegal drugs.

Reporters tried to get the side of the suspect but to no avail, he  simply stares at people,  and  can only identify his name and the name of his mother