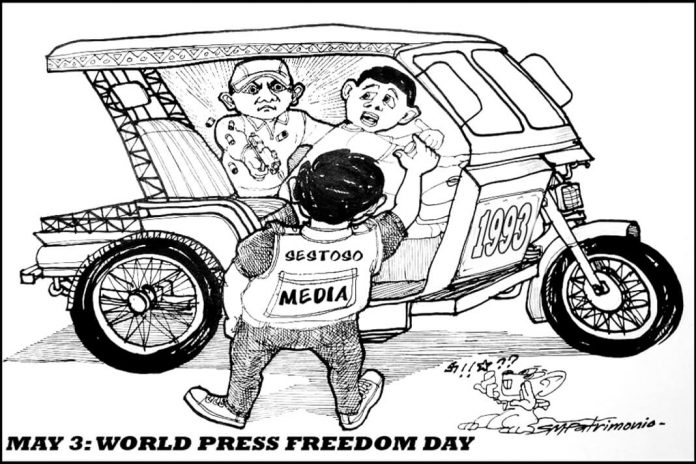 DUMAGUETE CITY – To kill a journalist is to deprive the society of another eye to observe human condition. Journalists represent a vital sector of a democratic society romanticized as the Fourth Estate. This Estate is often defined as that portion of the society that wields an undeniable influence on the society itself but does not form part of an organized political segment. This definition allows journalists to become active commentators and critics of the ever-evolving socio-political sphere. Today, this Fourth Estate is under a relentless assault worldwide and the Philippines is a witness to this polemic attack against the time-honored doctrine of freedom of expression and freedom of the press.

Last April 30, an attempt to remove another member of this Fourth Estate and to subdue freedom of expression was done here in our very doorsteps in Dumaguete. Edmund Sestoso, former chairman of the Dumaguete Chapter of the National Union of Journalists of the Philippines (NUJP) and host of “Tug-anan” on DYGB 91.7 FM was shot by a motorcycle-riding gunman last April 30. Albeit the real motive of the crime is yet to be determined, many believe that it is because he is a valiant and bold radio commentator.

Article III, Section 4 of the 1987 Constitution of The Republic of The Philippines, guarantees the freedom of speech, of expression, or of the press. The media and the journalists are the lifelines of the freedom of expression. Therefore, the preservation and the independence of the freedom of the media and the press are pivotal to maintain a truly democratic rule. Edmund Sestoso and the rest of the millions of journalists and members of the press around the world must be not be curtailed in their practice and it is the responsibility of the State to allow them to use their pens without restrictions.

Censorship is a double-edged sword. It can be a vehicle to exercise police power and sovereignty to preserve the integrity and safety of a State for its people but often times, censorship is used as a vicious blade to defeat freedom of expression. Moreover, the gravity of the impunity to our freedom is made graver because a huge number of these killings remained unsolved. There is a swelling cumulus of incidents of press and media killings that to this day screams for justice but is buried along the heaps of files in police works. Media impunity creates the perfect chilling effect and a climate of fear for those who are at the vanguards of our socio-political freedom and this, once and for all, needs to STOP!