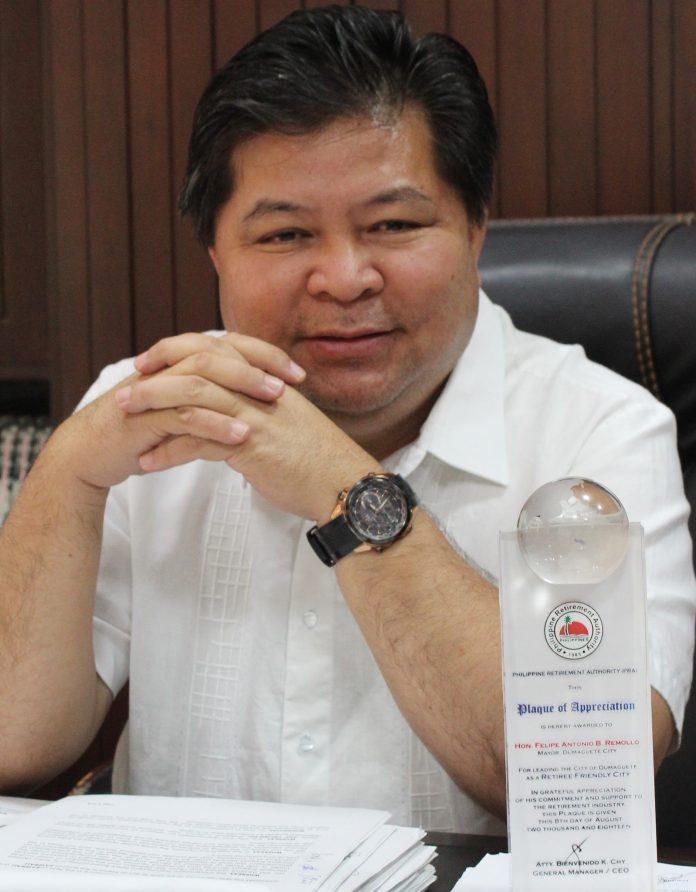 Mayor Felipe Remollo cited the gaines made by the City in the past year.

In a series of year end meetings and assessments, he lauded the various officials in the City Council, key officers of the departments and all employees for their efforts to meet and some even  surpass their targets for 2018.

Mayor Remollo enumerated for the record, the international, national and regional recognition of the city’s competitiveness in local governance, trade and business and sports tourism.

Among these awards and recognition reaped by the City are:

Best Retirement Area in the country by the Philippine Retirement Authority; 2nd Most Efficient Government in the country among all component cities, having excelled in creating business friendly environment by cutting red tape and corrupt free transactions; 2017 Regional Best Public Employment Service Office and Ma. Socorro Mira as Best PESO Manager of the region; Barangay Banilad as Outstanding Barangay and Maria Socorro A. Tuble of Poblacion 1 – 1st Runner Up Search for the Regional Outstanding BNS Award received during the 2018 Grand Nutrition Awards of Region 7; one of the Most Peaceful and Child Friendly cities in Central Visayas and LGU Sports Organizer of the Year and Runner up as Sports Tourism Destination of the Year in the Philippines (after Subic Freeport).

The Dumaguete PNP was cited as the Best City Police Station in the province principally in its campaign against illegal drugs and the significant decrease in the number of crime incidents in its area of responsibility by the Negros Oriental Police Provincial Office.

Since his assumption into office in mid-2016, Mayor Remollo’s administration has not received any notice of disallowance from the Commission on Audit in all its financial transactions.

To further professionalize and boost the morale of those in the service, the administration adopted merit based hiring and promotions, mandatory drug tests to all officials and employees, automated payroll system and strict adherence to bidding processes.

The city also earned the distinction as 2nd Most Efficient Government in the country among all component cities during the 6th Regional Competitive Summit organized by the Department of Trade and Industry to recognize the most competitive Local Government Units or LGUs for 2018 through the Competitiveness Bureau to highlight the results of the Cities and Municipalities Competitiveness Index (CMCI) 2018, which targets to rank over 1,500 local government units across the Country.

This is in recognition to Mayor Remollo’s efforts to enhance the Business One Stop Shop or BOSS to assist all entrepreneurs, big and small, to experience ease in doing business in Dumaguete City.

As a result there are now 7, 459 business establishments operating in the city in first half of 2018 up from just 7, 074 in 2016; created 10, 102 local jobs from July 2017 to June 2018; City Treasurer Cristina Merced projected P 324 million revenues from local sources or businesses alone in 2019; thus the city has approved its biggest ever budget at P 790 million for 2019. In 2017, the city has posted an excess collection of P 91.4 million in revenues, which can be repeated by the end of current fiscal year 2018. Mayor Remollo credited this feat to the aggressive tax collection and sound fiscal management of all responsible officials, who are committed to good housekeeping and ethical conduct in service.

Dumaguete City is also runner-up to Subic Freeport as the Sports Tourism Destination of the Year in the entire country.  Next year, the city has been selected as host of the Central Visayas Regional Athletics Association Meet, Private School Athletic Association Meet and the exhibition game between Ateneo and La Salle slated on February 2019.

The increased collections has funded the priority projects of Mayor Remollo, just recently some 25, 711 get early Christmas cash gifts from the City Government of Dumaguete under the bigger Pamaskong Handog this year to include 16, 605 indigent families, 8, 336 senior citizens and 769 Persons with Disabilities, who received P 500.00 each as their Christmas gift from the local government totalling P 12.8 million.  This is the biggest budget appropriation for the Christmas cash gifts to reach the most number of vulnerable and poor residents of the city.

Meanwhile, PLDT won the bid to undertake the P 69.7 million Lease of CCTV system in the next 8 years to include installation of 330 cameras in 30 barangays starting March 2019 to help solve and prevent crimes, improve traffic management and serve as early warning system during calamity.

Next in the pipeline is the installation of the modern traffic lights system in strategic locations of the city. PLDT and another company has presented separate proposals to the Bids and Awards Committee.

The city government has also allocated P 25 million for the construction of a full span concrete bridge in Colon Street at the back of Foundation University with the public bidding of the project slated in the first quarter of 2019. Another bridge will replace the dikes near the Bureau of Internal Revenue to be funded in the same period of 2019.

Civil works for the restoration of the Old Presidencia and the Quadrangle is nearing completion by first quarter of 2019 to serve as a regional museum.

The multi-million shoreline protection in the south end of the boulevard starting at the Dumaguete Press Club to shield the coastal communities of Poblacion 1 (Tinago), Calindagan, Manganao and Banilad from the rising sea water and storm surge.

Finally, the construction of a central Materials Recovery Facility in Barangay Candau-ay will ensure that the closure of the dumpsite in the same barangay will be realized at the soonest once all the documents and permits are secured from the regulatory agencies.

Mayor Remollo has rallied all local official and employees but also the residents to continue their cooperation and support so that the vision of his administration to build a livable, cleaner, peaceful and progressive city will be fully realized as a united people.