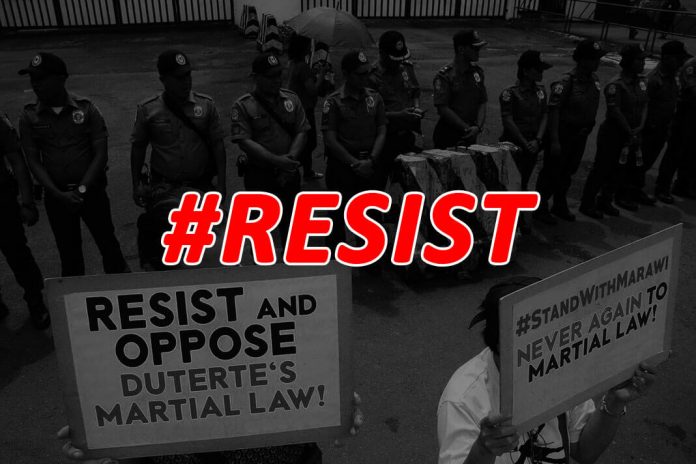 First and foremost, let us not associate martial law with the kind of martial law during the late dictator Ferdinand Marcos. Dictator Marcos, as admitted by Juan Ponce Enrile, that the declaration of martial law was used as a means of giving him absolute dictatorial powers. Even the alleged assassination attempt on defense Juan Ponce Enrile which Enrile later admitted as being staged or fake to justify martial law. Martial law is the imposition of direct military control of normal civilian functions by a government, especially in response to a temporary emergency such as invasion or major disaster, or in an occupied territory.

Typically, the imposition of martial law accompanies curfews; the suspension of civil law, civil rights, and haveas corpus; and the application or extension of military law or military justice to civilians. Civilians defying martial law may be subjected to military tribunal (court-martial).

During the Second World War, President José P. Laurel placed the Philippines (then a client state of Imperial Japan) under martial law via Proclamation ¹ 29, dated 21 September 1944 and enforced the following day at 09:00 PST. Proclamation ¹ 30 was issued on 23 September, declaring the existence of a state of war between the Philippines and the United States and the United Kingdom, effective 10:00 that day.

The country was under martial law again from 1972 to 1981 under President Ferdinand Marcos. Proclamation ¹ 1081 (“Proclaiming a State of Martial Law in the Philippines”) was signed on 21 September 1972 and came into force on 22 September. The official reason behind the declaration was to suppress increasing civil strife and the threat of a communist takeover, particularly after a series of bombings (including the Plaza Miranda bombing) and an assassination attempt on Defense Minister Juan Ponce Enrile in Mandaluyong.

The policy of martial law was initially well received, but it eventually proved unpopular as the military’s human rights abuses (e.g. use of torture in intelligence gathering, forced disappearances), along with the decadence and excess of the Marcos family and their allies, had emerged. Coupled with economic downturns, these factors fermented dissent in various sectors (e.g. the urban middle class) that crystallised with the assassination of jailed oppositionist senator Benigno Aquino, Jr. in 1983, and widespread fraud in the 1986 snap elections. These eventually led to the 1986 People Power Revolution that ousted Marcos and forced him into exile in Hawaii where he died in 1989; his rival presidential candidate and Aquino’s widow, Corazon, was installed as his successor.

During this 9-year period, curfews were implemented as a safety measure. Majority of radio and television networks were suspended. Journalists who were accused of speaking against the government were taken as political prisoners, some of them to be physically abused and tortured by the authorities.

Others have stated that the implementation of Martial Law was taken advantage by the Marcos regime. Billion pesos worth of property and ill-gotten wealth was said to be acquired by Marcos’ consort, First Lady Imelda Marcos. This alleged money laundering issue was brought back recently, particularly in the PiliPinas Debates 2016 for the recently held Philippine Presidential Elections on May 9, 2016. Ferdinand “Bongbong” Marcos, Jr., Marcos’ son, ran for the Vice Presidency and lost.

There were rumours that President Gloria Macapagal-Arroyo was planning to impose martial law to end military coup d’etat plots, general civilian dissatisfaction, and criticism of her legitimacy arising from the dubious results of the 2004 presidential elections. Instead, a State of National Emergency was imposed in 2006 from 24 February to 3 March, in order to quash a coup attempt and quell protesters.

On 4 December 2009, President Arroyo officially placed the Province of Maguindanao under a state of martial law through Proclamation 1959. As with the last imposition, the declaration suspended the writ of habeas corpus in the province. The announcement came days after hundreds of government troops were sent to the province to raid the armories of the powerful Ampatuan clan. The Ampatuans were implicated in the massacre of 58 persons, including women from the rival Mangudadatu clan, human rights lawyers, and 31 media workers. Cited as one of the bloodiest incidents of political violence in Philippine history, the massacre was condemned worldwide as the worst loss of life of media professionals in one day.

On 23 May 2017, President Rodrigo Duterte declared martial law throughout the main southern island of Mindanao, through Proclamation No. 216, due to the attack of Maute Group in Marawi City, Lanao del Sur. It was announced in a briefing in Moscow by Secretary Ernesto Abella, and will be in effect until December 2019.

Thank God, President Duterte announced that he has no plan to place Negros Oriental under martial law.