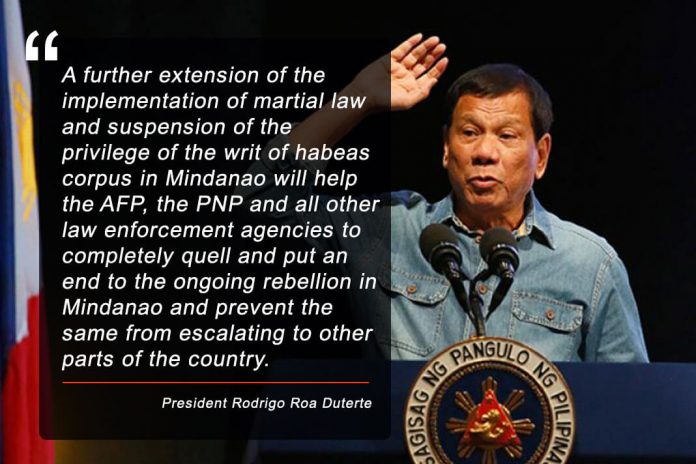 PHILIPPINES – It took a majority of members of Congress less than half a day to approve the request of President Rodrigo Duterte for martial law extension in Mindanao until December 31, 2018.

The Senate voted 14-4 while the House voted 226- 23 in favor of extending the declaration for another year during a joint session in the Congress Wednesday.

In all, 240 members of Congress voted to approve the extension while 27 voted against.

Those who voted against the extension were members of the Senate minority including Sens. Bam Aquino, Franklin Drilon, Risa Hontiveros and Francis Pangilinan. Sens. Chiz Escudero and Cynthia Villar were present in the joint session but were unable to vote.

In his letter addressed to Congress, Duterte cited continuing threats of ISIS-inspired terrorists, local terrorists groups and the New NPA in seeking an extension for the declaration.

The president requested the extension upon the recommendation of Defense Secretary Delfin Lorenzana to “ensure total eradication of DAESH-Inspired Da’awatul islamiyah Waliyatui Masriq, other like-minded Local/Foreign Terrorist Groups and Armed Lawless Groups, and the communist terrorists and their coddlers, supporters, and financiers.”

A handful of lawmakers opposed the extension, saying that the martial law extension has no basis in the 1987 Constitution and can lead to more human rights violations in Mindanao.

Senate Minority Leader Franklin Drilon questioned the inclusion of the New People’s Army as a basis for the extension since they were not included in the May 23 proclamation issued after Islamic State-inpsired Maute group terrorists attacked Marawi City in Lanao del Sur.

“If we were to believe that the government is intent on ending the war against the NPA, which operates not only in Mindanao but all over the country, then it is entirely possible that their operations would have to be extended beyond Mindanao to meet that objective,” Drilon said.

Justifying his vote, Pangilinan said that there is no need to extend martial law as there is no actual rebellion.

Hontiveros said that she voted no because Duterte failed to provide evidence that martial law provides an advantage to government troops in their fight against Maute terrorists.

Malacañang, on the other hand, welcomed the approval of both chambers of Congress to extend the proclamation of martial law and the suspension of the privilege of the writ of habeas corpus on Mindanao.

“Public safety is our primordial concern; thus, we ask the public to stand behind the Administration and rally behind our defenders to quell the continuing rebellion in Mindanao,” Presidential spokesperson Harry Roque said.

Duterte not inclined to proclaim Martial Law for Philippines