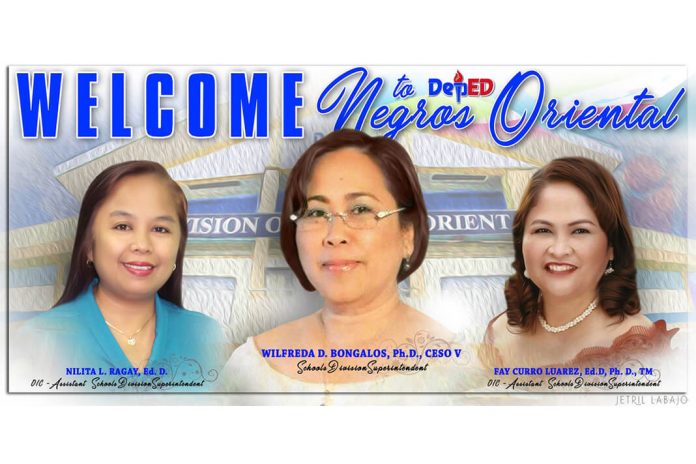 DUMAGUETE CITY – Division superintendent of schools in the whole of region 7 have been reshuffled especially those who have reached the maximum stint of five years in one division.

Assistant Regional Director Dr. Salustiano Jimenez confirmed the designations in a meeting with Gov. Roel Degamo, who challenged the new DepEd division superintendent of schools is to continue the plans and programs started by her predecessor Dr. Jimenez who is now the assistant regional director.

The governor has emphasized that education is second to health as among the topmost priority of his administration and so without hesitation, he constructed 70 or more classrooms required to fill in the gaps and fielded as many extension teachers as it can in the implementation of the K to 12 program.

With the designation of Dr. Bongalos as division superintendent of schools in the Negros Oriental division, Jimenez said he can now focus with his main job in the region while coming in once in a while to address concerns of the sub-regional office in Dumaguete.

Meanwhile, Jimenez said the Department of Education produced the first graduates of the K to 12 program this year. In fact, Jimenez received feedback a considerable number of graduates are going to work in businesses even industries.

He also disclosed that funding allocation for the construction of school buildings under the K to 12 program is not a problem, its in the implementation of the project by the Department of Public Works and Highways and its contractors.

Jimenez is coordinating with DPWH to address the backlog in preparation for the opening of the next school year.

For the new Negros Oriental division of schools superintendent, Bongalos said her job is made lightier with the full support and assurance of the governor to help fill-in the gaps.jrg