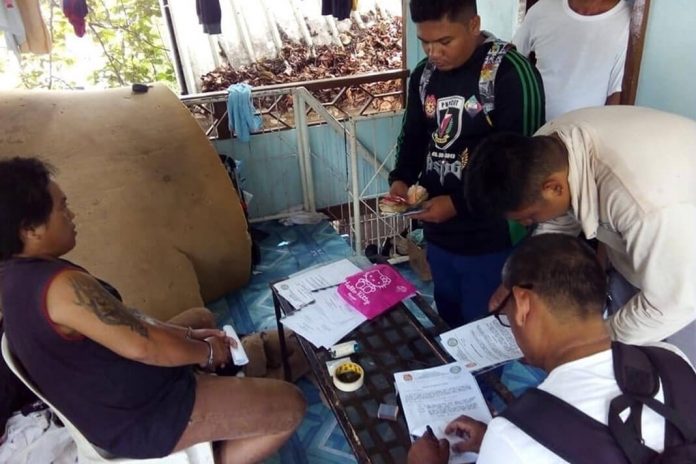 DUMAGUETE CITY – A level 3 drug personality was nabbed after an early morning search today in the house where he lives, yielded shabu and a considerable amount of money believed to be proceeds of the nefarious activity.

Provincial Intelligence Branch-Special Operations Group (PIB-SOGPDEA) team leader PSIns Armel Von Alegria said his team received information from the neighborhood that a certain Gabriel Caro, 41 years old, is the source of shabu being circulated in the area and that individuals on board motorcycles are frequenting the place especially at night and during the wee hours in the morning.

This information was bolstered by the information relayed by their counterparts in Cebu that this group is also operating in Dumaguete, after one of their cohorts was arrested with almost one kilo in Cebu recently.

Surveillance operation was conducted and a test buy before a search warrant was applied in court.

Recovered during the search is one bulto of shabu, lighters, and cash proceeds amounting to P36,500.

The money was recovered from an airconditioned room but without an occupant, and that operatives suspect the occupant might have sensed the presence of lawmen who were on their way to serve the search warrant.

The suspect, however, denied ownership of the recovered items including teh money in claiming, the house where the search was served is not owned by him, while their house is situated next to it.

According to Alegria, its the usual alibi of suspects. Tactical interrogation were also conducted against three or four Cebuano-speaking individuals who were renting in that house.

The highway patrol group was also checking on a vehicle believed to be parked overnight near the area, because one of them said it was owned by one of their friends.