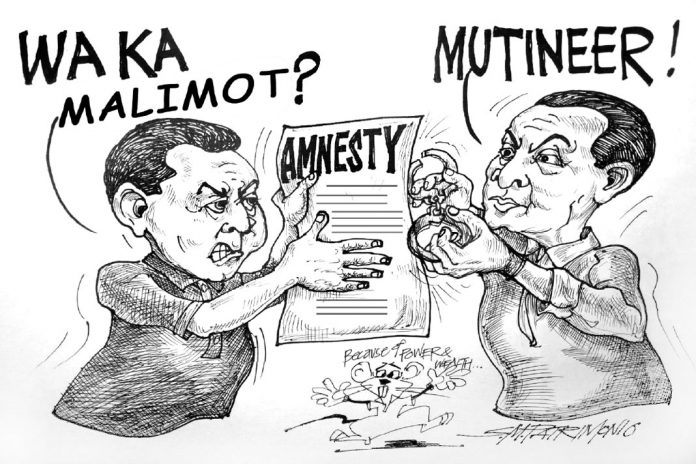 Three major political events hap pened on September 11. First, it was the anniversary of the bombing of the World Trade Center in New York which the whole world paused to remember; the birthday anniversary of the late president Ferdinand Marcos which was celebrated by townsfolk in Batac, Ilocos Norte, birthplace of the infamous dictator (noticeably absent during the celebration were equally infamous wife, Congresswoman Imelda Marcos, and son, Bongbong). The third siginificant event, of course, was the judicial notice of the Supreme Court on the assurance of Pres. Duterte that Sen Trillanes will not be arrested unless the Makati Regional Trial Court (RTC) will issue such an order.

The net effect of the judicial notice by the Supreme Court on the non arrest of Trillanes would render the petition of Trillanes moot, meaning, it will be pointless to rule on the petition and prayer for a temporary restraining order since the president already pre empted the high tribunal of non-arrest.

For civilian Filipinos, we also take notice of the Duterete government’s track record in upholding the rule of law. But what is fact is that Duterte now holds the grip on the Supreme Court in the sense that he has enough appointees for associate justices that he can easily persuade the justices of his present and future legal preferences. Being Duterte’s appointees, it is by tradition that they will uphold the preferences of the appointing power.

The focus is now on the Makati RTC. Will it uphold Duterte’s Proclamation 572 declaring the nullity of the Magdalo mutineers’ amnesty issued by former Pres. Noynoy Aquino who delegated execution to then Defense Secretary Voltaire Gazmin?

If there were no valid amnesty, can it be rectified by Aquino’s possible ex post facto signing of the amnesty or will the court invalidate Aquino’s proclamation of amnesty which might mean it is still valid but wrongly, if not, fatally implemented?

These are interesting legal issues for the books. Like good citizens, we will just await the decision of the court about the legality or nullity of the Aquino amnesty on the Magdalo rebellion.