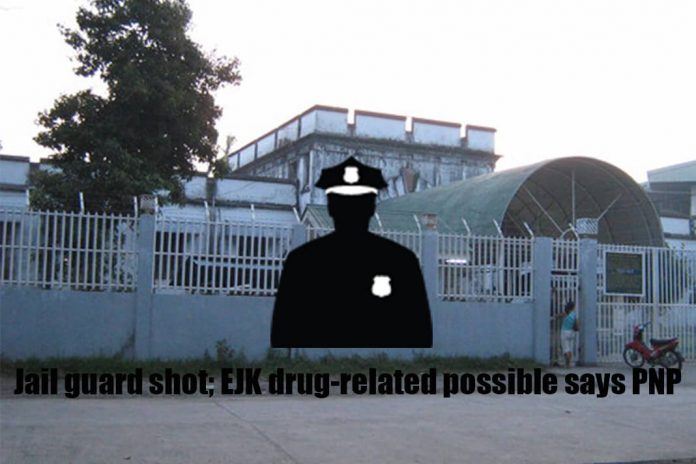 DUMAGUETE CITY – The Dumaguete City police is digging deeper into the motive and possible cause of the shooting to death of a provincial jail guard last night by unidentified suspects who were on board two scooter motorcycles.

Shot dead in cold blood is PG1 Vicente Enrique Dominado, 47, resident of Boloc-boloc, Sibulan who succumbed to at least 13 gunshot wounds in different parts of his body, two hit his head that caused his instantaneous death.

Negros Oriental Detention and Rehabilitation Center (NODRC) warden Franklin Culanag has confirmed that PG1 Dominado was on duty last night, but asked permission from the officer of the day to buy medicines for his stomach problem.

However, he was informed few minutes later that Dominado was killed by backriders of two motorcycles while he was sitting at the Norman vulcanizing shop in Daro on or about 6:40 in the evening.

The vulcanizer identified as Dionaldo Segara, a.k.a Cocoy disclosed that the jail guard arrived with a companion who was conversing to somebody through a cellphone and overheard the victim saying to his companion to proceed to where they are supposed to go, and to inform the person on the other end of the phone that he will just follow while his motorcycle tire is being vulcanized.

As soon as his companion left the area, few minutes later, four individuals on board two scooter motorcycles arrived and without provocation shot him twice (double tap) followed by successive bursts of gunfire.

The vulcanizer could not recognize the faces of the suspects because they were wearing bonnets and that he was facing west where the victim was sitting while the suspects were firing from his back after which they took the service pistol of the victim and fled towards the interior of Cimafranca Subdivision in Daro while firing shots into the air.

PNP provincial director PSSupt Edwin Portento, since illegal drugs were recovered, the nearest angle so far that is being looked into is the victim’s possible involvement in the illegal drug trade. Records will show the victim had a drug case few years ago but was dismissed.jrg