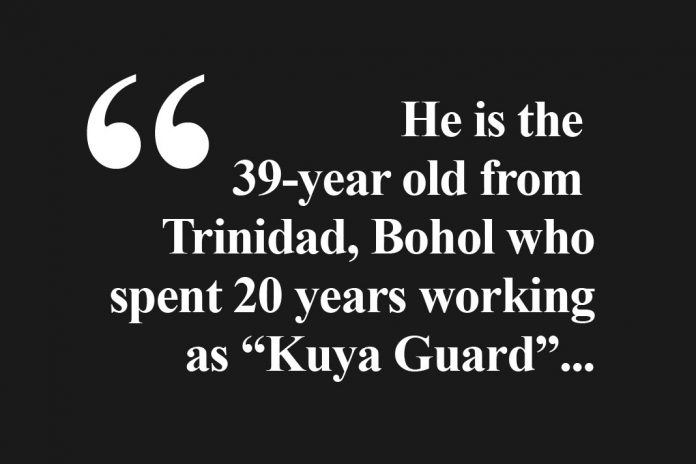 He is the 39-year old from Trinidad, Bohol who spent 20 years working as “Kuya Guard” (security guard) at the elementary campus at one of the highest value education in Cebu- the St. Theresa’s College (STC).

Sometimes, he had to walk home to save the precious pesos to finish schooling. Boy is Edwin proud as this month of August he starts teaching at the same STC in Cebu. “From Kuya Guard to Sir”. It’s never too late, buddy.

Meantime, Zosimo Bolanos, 70, of Batangas saw his peers enjoying the golf course, depressed with arthritis and setting dementia or patronizing the telenovelas for hours. He passed the law course at that age when he realized back when he was 66 -that he cannot afford to slide back physically and mentally after he lost his wife of 38 years, Rosalinda.

Now, Zosimo teaches with gusto the graduate and undergraduate students of the College of Criminal Justice at the Lyceum of the Philippines University in Batangas. Never too old, buddy.

Bolanos’ parents were too poor to send him to college and so he passed his Liberal Arts and Education degrees by toiling as a janitor in the municipality and parttime worker in his high school alma mater. And going to school at night.

Poverty is never a hindrance and age is just a number for Macuja and Bolanos.

Same with Flordeliza Edroso, also 70, who finished high school at that age in 2014 and was to take a scholarship grant from Mayor Rex Gatchalian of Valenzuela City major in Hotel and Restaurant Management.

Flor had 11 other siblings and since she was in the last batch of kids, she had to stop schooling at secondyear high school many years ago -making do with her work as a part-time factory help in a plastic company.

Her husband, Agapito, is a degree holder and their children (two sons aged 43 and 36) and a daughter (40 years) are likewise college graduates and made Flor insecure.

So she dared to go back to school, wearing the school uniform in the Valenzuela High School alongside kids young enough to be her grandchildren who call her “Nanay.”

These three stories continue to edify us in a country wherein 11 million – by choice or poverty- never touched school or textbooks in a nation where there are 112 state colleges and universities offering free tuition.

This tale reminds us of the great socialist dictator Fidel Castro of Cuba who placed education and health in the nation’s top agenda since the 1960’s Literacy Program drive.

Today, medical education in Cuba is free and has the best ratio of doctor per population in the whole world (Cuba has 11 million people). Health care is free since Health programs constitute 11%of GDP (Gross Domestic Product) compared to 9% of the United Kingdom.

Cuba can even afford to send medical missions for free in crisis-stricken nations.

Despite intermittent shortages in food and medicines, the average life expectancy of the Cubans rivals that of the First World. The Cuban male (81 years) and female (77) which is at par of progressive UK’s (83 male) and (79 female).

Something about education and health, therefore, correlates symbiotically. Something about the wise appropriation of the National Budget with -bias towards social healthcare works tremendously for the good of many.

We truly need to review our Education and Health programs here. Because as we just said, “It’s never too late, buddy”.