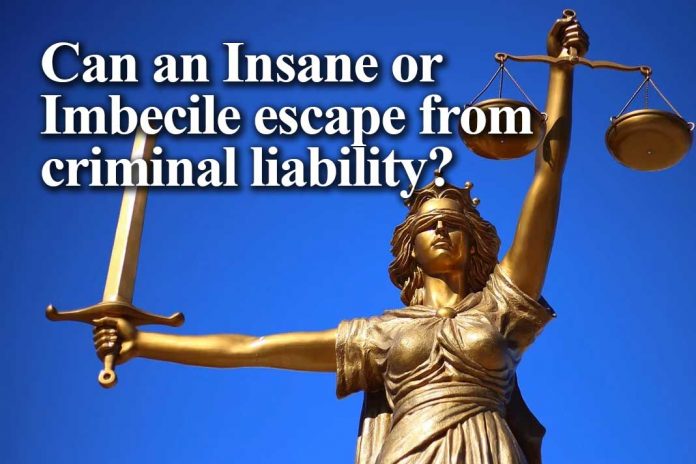 Can an Insane or Imbecile escape from criminal liability?

What is an imbecile?

An imbecile is a person marked by mental deficiency. In order that a person could be regarded as an imbecile within the Revised Penal Code, he must be deprived completely of reason or discernment and freedom of the will at the time of committing the crime (People vs. Formigonez, 87 Phil. 658)

What is an insane person?

An insane person is one who has an unsound mind or suffers from a mental disorder.

What is Lucid Interval?

Lucid interval refers to a brief period during which an insane person regains sanity that is sufficient to regain the legal capacity to contract and to act on his/her own behalf.

What happens then if an imbecile or an insane killed someone?

When the imbecile or an insane person has committed an act which the law defines as a felony, such as murder, the court shall order his confinement in one of the hospitals or asylums established for persons thus afflicted, which he shall not be permitted to leave without first obtaining the permission of the same court.

Is an insane person or imbecile totally exempted from criminal liability?

No. An insane person is exempted only from criminal liability unless he has acted during a lucid interval. If the court therefore finds the accused insane when the alleged crime was committed, he shall be acquitted but the court shall order his confinement in a hospital or asylum for treatment until he may be released without danger. An acquittal of the accused does not result in his outright release, but rather in a verdict which is followed by commitment of the accused to a mental institution.

What are the other exempting circumstances identified under the law?

2. Persons above 9 years old but below 15 if they didn’t act with discernment;

3. A person performing a lawful act with due care but causes injury by mere accident without fault or the intention to cause the injury;

4. Any person compelled by an irresistible force (like having a gun put to his head, for example);

5. Any person acting under the impulse of an uncontrollable fear of equal or greater injury (like a death threat or hostage- taking);

6. If a person who is required to perform an act required by law but is prevented by a lawful or insuperable cause.