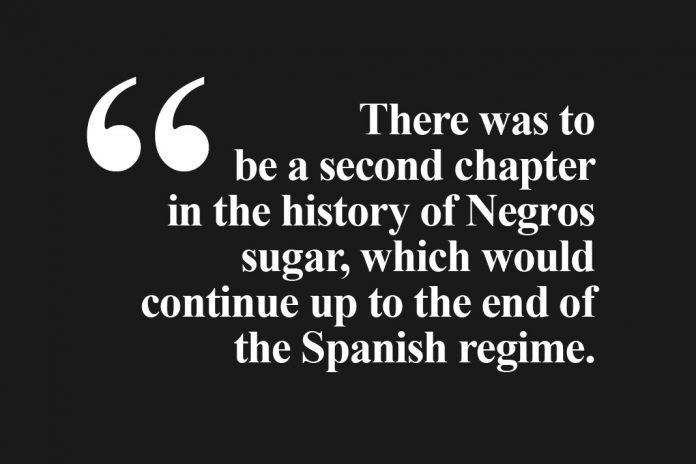 By 1863, the first stage in the coming of sugar to Negros was over. The technology of cultivation as well as that of milling the sugar cane and the commercialization of sugar had all been substantially improved.

There was to be a second chapter in the history of Negros sugar, which would continue up to the end of the Spanish regime. This period may be subdivided into two clearly distinct phases.

The first of which lasted up to 1884 and was characterized by the uninterrupted expansion of the haciendas and of the volume of trade.

Prices remained high and the harvests were easily sold. Private initiative was encouraged. Government was only requested to remove red tape, such as the abolition of passports to travel abroad and to the province, the speeding up of the processing of the papers regarding the recruitment of native labor, the abolition of the surcharge on the goods carried in foreign vessels, etc.

On the other hand, the problems concerning credit, the acquisition and titling of property, communications, business associations, improvements in the technology of production and more active participation in trade did not require government assistance.

The hacenderos had enormous confidence in the huge profits that they were making and they did not stop to consider that these profits could disappear if the highly favorable international situation changed.