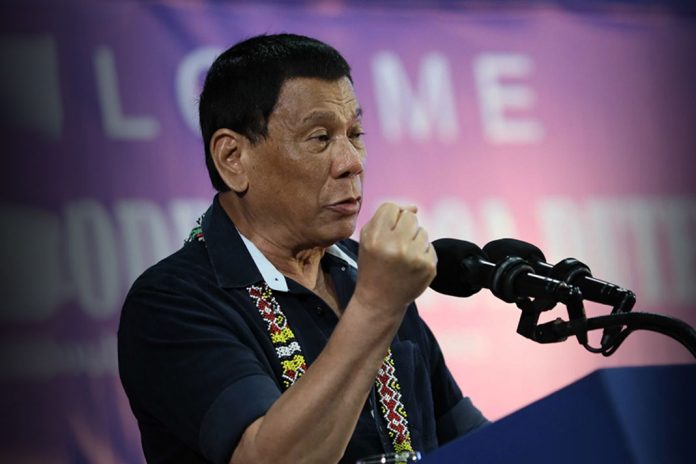 President Rodrigo Duterte will just be too glad to be the first to obey the so-called “Bawal Bastos” law which seeks to penalize catcalling and other gender-based harassment in public spaces and online which law Duterte himself signed last April yet but released Monday.

Duterte, who is known for his controversial remarks and actions toward women, signed Republic Act 11313 or the Safe Street and Public Spaces Act of 2019 signed by Pres Duterte last April 17, but the information was only released to the media on Monday July 15.

The law seeks to prevent gender-based sexual harrassment from occurring in streets, public places, online work places and educational and training institutions. Among these prohibited acts are cursing, wolf-whistling, cat calling, leering and intrusive gazing, taunting, unwanted invitations, misogynistic transphobic, homophobic and sexist slurs, persistent unwanted comments on ones appearance, relentless requests for ones personal data or details such as name, contact number or address, and social media details or destination, use of words, gestures, or actions that redicule on the basis of sex, gender or sexual orientation, identity and or expression.

The principal author of this law is Sen Riza Hontiveros but we never heard it being deliberated in Congress. We don’t even know the other brilliant legislators who coauthored such law.

“Since the President signed that law, it means that he recognizes the need for that law. Since he’s the Chief enforcer of all the laws in the Philippines, he’ll be the first one to obey that (new) law ,” Presidential spokesman Salvador Panelo said in a Palace briefing Tuesday. Duterte, legally speaking, has not yet violated such law despite his controversial comments in the past. There is no sanction or penalty if there was no law in place at the instance of a violation. Let us see how the President will be with this law in place.

Violators upon conviction will be fined P1000 to P100,000 and may also be imprisoned for one month.

Panelo, who is also Duterte’s chief legal counsel, also asserted that the President never intended to offend women with his sexist jokes, even if it did offend many.

Duterte’s equally decent and moral spokesperson said “He never was bastos. When he cracks jokes, it was intended to make people laugh. Never to offend. If you will just listen to the jokes of the President, talagang matatawa ka e. Hindi naman bastos,” said Mr Duterte’s alter ego Panelo who seem to have the same chemistry with each other.

The Palace official explained further that under the new law, the “offended party must be identifiable, and is offended personally by an offender,” before the hand of the law reaches him or her.

“That particular law is penal in nature, meaning criminal in nature. In other words, the subject offended party must be offended personally by an offender,” he said.

Duterte has been criticized for his sexist jokes about women and rape. He recently drew the ire of women’s rights groups and some lawmakers for kissing a married Filipino woman in South Korea.

Others say the new law will have no teeth because unless it specifies or singles out an offended party, then there is no crime because there is no specific victim. And if the bastos offender is speaking in general terms therefore nobody can say that he or she is the one being alluded to by the offender, therefore no complainant, no crime.

Some legal quarters say the law is a big joke because who would single out or vulgarize a specific victim at the risk of being prosecuted unless he is mentally deranged? Or can prove the same? (By Darryl John Esguerra INQ)