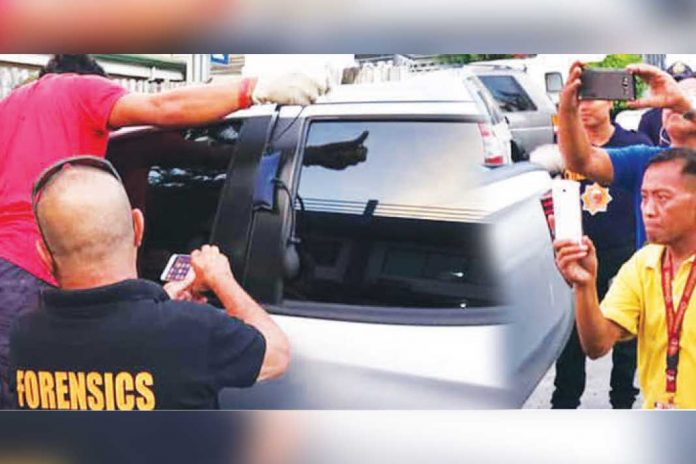 By virtue of a search warrant issued by RTC Executive Judge Gerardo Paguio, for the People of the Philippines, the controversial Mitsubishi Strada involved in the killing of broadcaster Dindo Generoso was opened by the CHPG highway patrol group and by PNP forensics personnel 5:15pm Wednesday afternoon at the PNP headquarters where it was impounded.

The search warrant of Judge Paguio was issued to its registered owner Tomasino Aledro based on the registration papers recovered inside the hot Strada. Police said Tomasino Tommy Aledro Jr, is at large for no apparent reason unless he is also involved…..

The Strada had plate number GAM 1959 based on conduction sticker no. B5-0500. However during the crime commission of Nov 7 the fake plate number FAX 5801 was mounted on the hot Strada which followed the gunman in tandem who executed the crime at Piapi crossing fronting the Tarbush snack bar at about 7:25am of Nov. 7 .

Among the witnesses to the opening of the hot car which was locked earlier were human rights officer Jess Canete, forensics and CHPG personnel PSSG Frederick opena and PSMS Jasmine Mores among others.

Twenty one items were recovered inside the hot Strada including the registration papers Xerox of Tommy Aledro jr, latent prints lifted inside the vehicle and the OR CR documents of LTO….and some personal effects which are now under serious scrutiny by forensics investigators.

President Duterte is recalled to have ordered a thorough investigation of the murder and get into the bottom of the case and leave no stone unturned. People are just hoping and praying.

What do all these indicate? Not much except that the hot Strada is registered under businessman Tomasino Aledro of Azumi subdivision in Batinguel, and some personal effects for men. The forensics investigators also presumably got fingerprints inside the car. Hopefully it will reveal who were the driver and passengers of that hot Strada on the morning of Nov. 7

The Generoso case is now a police matter and should be treated as such, meaning opinions expressed surrounding the incident will be purely speculative, and circumstantial and have to undergo deeper investigation until the evidence deduced will be beyond reasonable doubt.