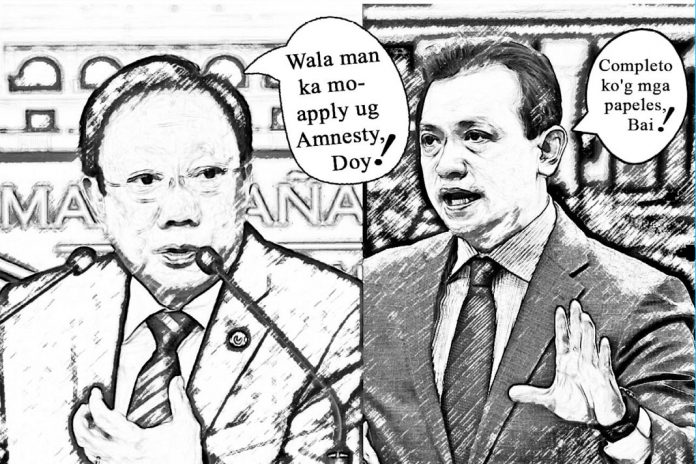 Even without blinking an eyelash, the Filipinos now notice with certainty that there is a government crackdown on the opposition even using the rule of law as a valid reason. Even during democratic times, the clash between the rulers and their critics never change, in good times, how much more in bad times.

There will always be a thousand and one reason to single out a certain administration critic with a bevy of valid legal reasons why he or she should be silenced, and worse, eliminated.

Former justice secretary and Lady Senator De Lima is done, at least silenced in detention; the Lady Chief Justice Sereno is now history , dismissed from office by a historic quo warranto the first in the country although she can now speak out to her heart’s delight; and now, another Senator Trillanes, an ex-marine and rebel who staged the Oakwood mutiny in 2006 (?) who as senator uses the senate floor to immune himself from liability. Will the government successfully dress him out? The man is still not history, but history in-in-the-making. And people and the whole world are watching.

There is again “heat” in the kitchen called Manila. Anytime, if things are miscarried, it could explode.

The ballgame is carefully played so that the democratic rule of law is not compromised . We are a bit glad that the battle still invokes the rule of law, and not (yet) martial law.

Like it’s Trillanes word against SolGen Calida’s, who tackles the case for the Duterte government. Amidst rising inflation, the China Sea tension; the anger of families of EJK victims; the monstrous traffic in the metro; the piles of garbage in Dumaguete; illegal drug trafficking and illegal gambling, insurgency; Muslim secessions; nothing has changed since Duterte assumed, but— repeat, BUT —definitely, these are so far, all REDUCED in number in both true and false statistics.

Next year will be elections again. Question: will the air still be democratic, or federal, or martial? Only Lord God can tell. One word: Abangan!….