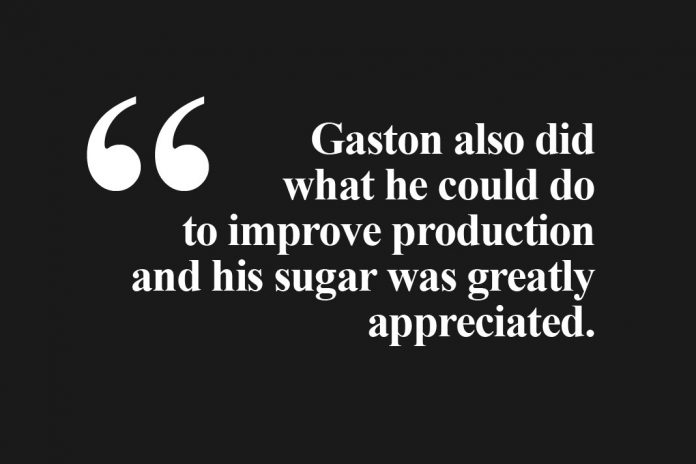 According Fr. Angel MARTINEZ CUESTA, OAR: There were then only four hacenderos in Negros and it was they who were perhaps the only ones who exported sugar. They were the Spaniards, Agustin Montilla and Eusebio Ruiz de Luzuriaga, the Frenchman Ives Leopold de Germain Gaston and a Filipina known in the records as Tia Sipa.

In 1854 Luzuriaga bought the bagasse-fueled oven referred to above for his hacienda and a little later Montilla also bought it. Gaston also did what he could do to improve production and his sugar was greatly appreciated. In 1856, people paid 1.00 peso above Iloilo average for Gaston sugar.

We do not exactly know why prices zoomed but it was probably due to the decision of the British government in July 1854 to do away with preferential tariffs in favor of British colonies. Also foreign companies in Manila increased their activities.

At the same time the Spanish government took into account that it was foolish to compel the provinces to course through Manila the merchandise that they produced for export and by a decree of 1855 it opened to foreign trade the ports of Cebu, Iloilo, Zamboanga and Sual (Pangasinan).

Direct shipment to foreign consumers saved producers and exporters double charges for weighing, loading, unloading and the large expense that they had to incur to ship their products to Manila. At that time the owners of the sloops and brigantines travelling from Iloilo to Manila charged 0.50 peso per picul and spent fourteen to twenty days per round trip.