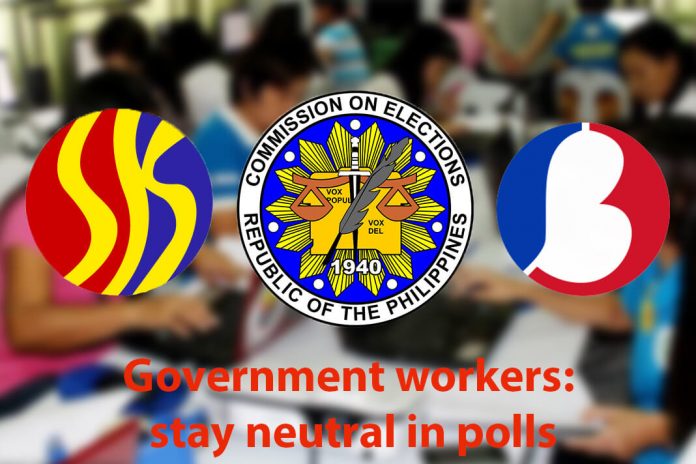 DUMAGUETE CITY – Under the law, public officials and employees must remain politically neutral in the upcoming May 14 barangay and Sangguniang Kabataan elections except for Job Order workers whose appointments or contracts did not need the approval of the Civil Service Commission.

Nevertheless, public officials and employees retain the right to exercise suffrage and vote for their preferred candidates as they are not supposed to engage in partisan activities. In fact, government employees must be careful with their social media accounts and avoid using the platform to endorse or criticize any candidate.

Meanwhile, despite the calls from some sectors, the Philippine Drugs Enforcement Agency will not bare in public the list of Punong Barangays or Kagawads who are allegedly in the narco list.

PDEA Central Visayas reportedly said that only President Rodrigo Duterte can disclose the names on the list. Besides, the premature publication of the names might violate the right of the officials to due process.

Even the Commission on Elections in Region 7 has called upon PDEA to bare the names purportedly to guide the voters in their choices on Election day. There are numerous reports that some barangay officials are into the drugs trade or addicted to the illegal drugs. The Department of Interior and Local Government has been campaigning for voters to reject candidates who are linked to the illegal drugs trade or even for failing to resolutely cooperate in the fight against drugs.