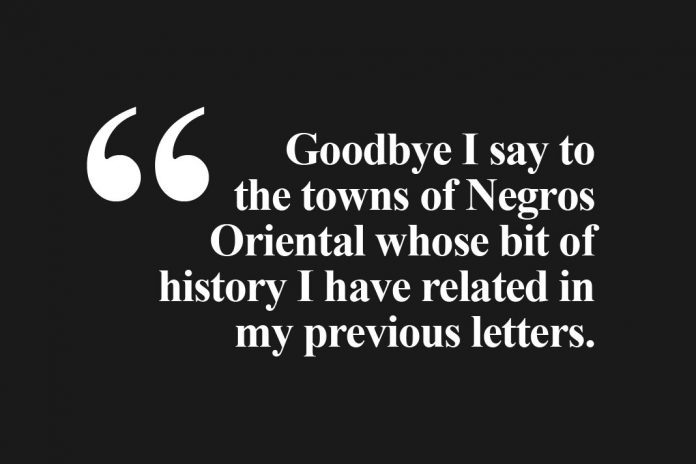 A little less than 30 years ago, we got a copy of a farewell letter written by Fr. Licinio Ruiz on 29 October 1915 in the Convent of the Recollects in Manila.

Given the full title “Correspondencia de Nuestros Misioneros, its subtitle is the following: “Una vuelta por la Isla de Negros.” Here is a translation from excerpts of the Spanish account:

Goodbye I say to the towns of Negros Oriental whose bit of history I have related in my previous letters. There would have been enough to tell about, but apart from some of those things that did not come to my knowledge there are others I have not wanted to refer to on purpose in order not to commit tiresome and wearisome repetitions; besides, they could be about the ordinary work of the parish priest, while they may be the ordinary work as usual, they do not cease having great merit, however, they were such that I had not put my mind to.

They are all such works that foster Christian worship and piety in a special way that our missionaries have as much distinguished themselves. They include very solemn fiesta celebrations, splendid processions, devotional exercises, annual retreat, formation of religious organizations, as well as the propagation of existing ones, such as the Sacred Heart organization.

These and many other works have been and are what all of our missionaries are occupied with in a constant and steady way, whose zeal for the glory of God and the salvation of souls is the motto they have taken pride in.