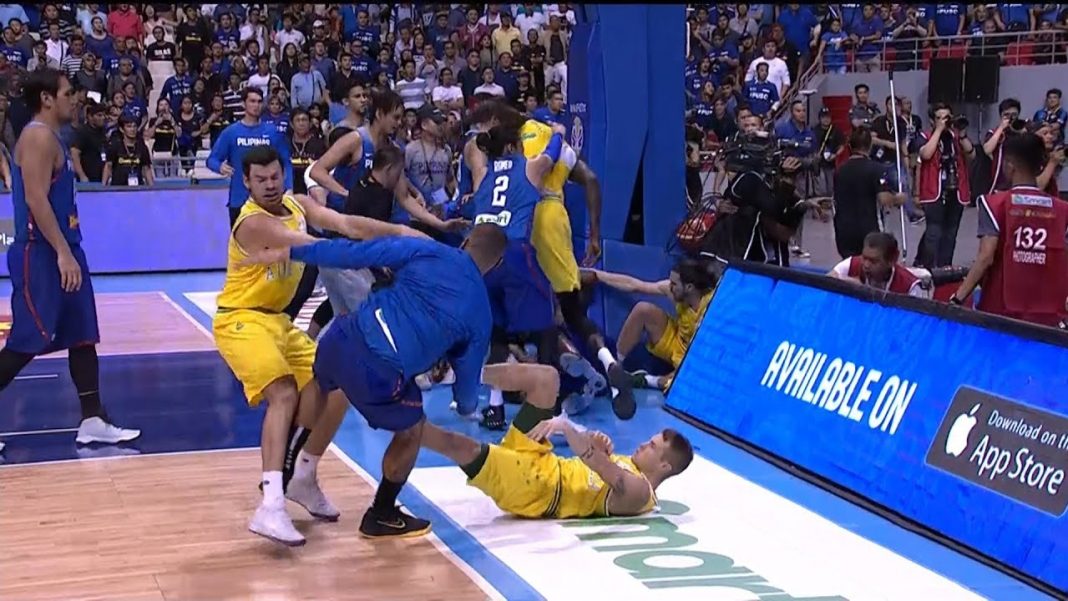 DUMAGUETE CITY – MONDAY NIGHT’S BENCH-LEARING fracas between Gilas Pilipinas and Australian cage national team proved to all and sundry why basketball and boxing are the Filipinos’ favorite sport.

Because ordinarily -and logically the Basketbrawl should not have happened because both teams had already qualified for the next round of the FIBA World Basketball championship.

Now, instead, there could be a steep price to pay. In the next few days, the FIBA will announce if the 13 players ejected from the game (including 9 from the Philippines) will be suspended from the tournament for good.

Although the Australian’s will lose its prized sweet-shooting forward Chris Goulding, Gilas Pilipinas losing 9 of it best cagers will cripple the national team and give rise to a second-class national quintet to replace them. Such a pity.

In recent memory, the RP team was much tamer. Already, the “dirtiest” was Tembong Melencio for holding shirts and pants and stepping on shoelaces of foreign opponents. Or best guard Ed Ocampo placing his foot in between the jump-shooting stars ‘ legs when firing like Shin Dong Pah of South Korea or Shegesaki Abe of Japan.

Worst was burly guard Bobby Jaworski football-kicking the butt of a fallen Korean in their own home court. But this free-for-all could be the worst recorded in recent FIBA history. Should we be embarrassed?

Psychologically, it seemed like the Gilas players were primed to react that way. But the fact that four-time PBA MVP Junmar Fajardo, Gabe Norwood, and Baser Amer kept away from the mayhem means there are still more mature guys in the team who knew RP had already qualified for the next round – so what is this silly violence going to take Gilas?

But the rest of the boys were differently disposed.

Gilas Pilipinas just ripped Chinese Taipei by a roaring 22 points in a most impressive game in Taiwan last Friday. The pressure, therefore, to really show their worth before 40,000 screaming live fans at the Philippine Arena and the millions glued to their TV sets was probably was too much.

Added to that was the insulting move of the Australian team to remove the advertising decals on the floor of the arena Sunday without asking permission from the organizing body. They cited the decals made the floor dangerously slippery for players.

Then there was the unnecessary provocation during the warm-ups from the Aussie side followed by the thrash talk -calling Filipinos “monkeys” inside the court-and the rugged physicality that the Australians (and New Zealanders, as well) are known for.

And unnecessary taunting when a Filipino was taking a free throw.

Physicality, yes, because as Jaworksi had lectured – if you do not want physical play -play chess, not basketball. Physical plays, yes- but not everything else the Aussies did we do not approve.

For instance, the Pogoy-Goulding collision was part of the live play.

Daniel Kickert’s forearm elbow on the neck of Pogoy was not. This, we believe, triggered the bench-clearing melee.

Coach Chot Reyes, for all his other antics and inappropriate outfits, is a great motivational player. He builds a team of – brothers who take care of each other inside the court.

We surmised this sense of “brotherhood” prevailed over “sportsmanship” when the Gilas came in as one galloping army to rescue a teammate. Excessive brotherhood? It is hard to lay judgment when we are not in the thick of the heat of the game.

Before the game, Reyes told the Gilas players that a big part of the nation is watching them. And many of the fans want to get edified that by their (Gilas) constant struggle against big odds and succeeding, they will give inspiration to the common man (Juan de la Cruz) that they, too, can succeed in life.

Alas, that gem of a thought got lost in the emotion of fulfilling high expectations of the Gilas team and the male pride stung in that inside the court the Aussies werenakalalaki (hard to translate to English).

Some Gilas players were without remorse and vowed they will repeat what they did if any team tried to bully Filipinos again. It is hard to argue against that sense of brotherhood. Or embarrassing nationalism, if others want to call it that.

On the other side, the Aussies were also in a bad mood. Two days earlier, they were upset by Japan 79-78, their first loss since joining the FIBA under the Asia-Pacific wing. They wanted to prove they were the best in that category and is still the world’s No.10 ranked basketball team.

To be quite frank, Gilas Pilipinas at No 21 – rank (or so) is not yet in the league of Australia at No 10 -ranked.

Instead of practicing more boxing, martial arts, and karate, we humbly suggest that Gilas team learns from the way Japan improved its recruitment of naturalized and home-grown talents to be able to bring down a top dog like Australia.

And by golly, we really have to develop our three-point shooting skills -whether finding the open space or improving their rotating screens for the shooter. That’s the only way the small guys can beat the big boys in basketball. Shoot the treys.

Not by emulating Manny Pacquiao and the late Bruce Lee. Pardon our sarcasm.