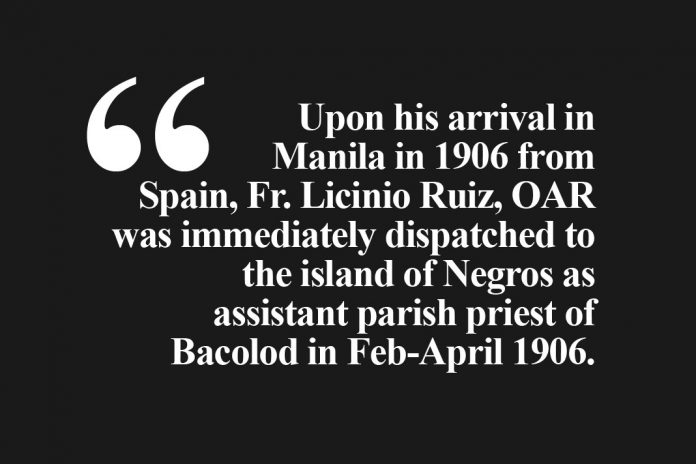 As a historiographer, Fr. Licinio Ruiz is well known among Augustinian Recollect missionaries working in Negros Island as elsewhere.

But as a missionary of the Order, he is least known in the towns of Negros Oriental and those of Siquijor Island where he served in the first two decades of the 20th century.

Upon his arrival in Manila in 1906 from Spain, Fr. Licinio Ruiz, OAR was immediately dispatched to the island of Negros as assistant parish priest of Bacolod in Feb-April 1906. The months that followed in May and June 1906, he was made interim pastor of Sibulan.

Much later in 1906-1908, he was assigned priest-companion in Siaton. In 1908, he was named parish priest of Zamboanguita, remaining in the town until 1913 when he went back to Manila to recover from an illness.

In March 1916, he was sent thereafter to the island of Siquijor with instructions from the Bishop of Cebu to administer the towns under the care of the Recollects, exercising the sacred ministry for a couple of years in Lazi and Maria.