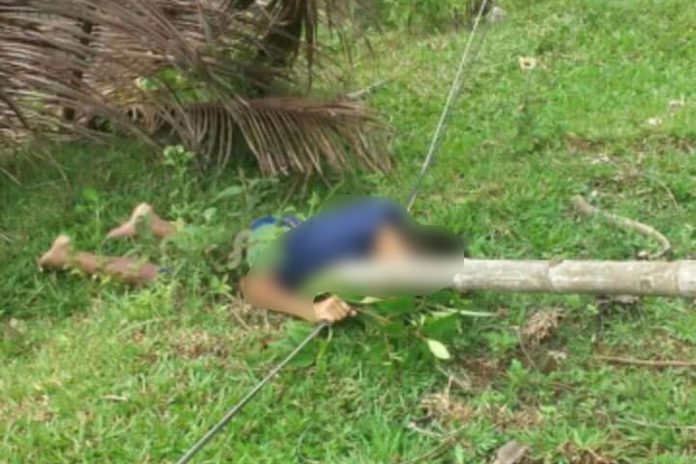 A former judge of the regional trial court believes that the power distributor whose “Live” power emitted in a dangling illegally tapped  electric cable  that killed an eleven year old boy, is liable for damages and compensation for the irreparable loss of life and future of this child.

Photos by police  at right show that the child victim Vicente Hisma  y Despojo, 11 years old , was instantly dead when he accidentally held the live wire which was  dangling along his way as he was going home last March 8 at noontime.(Below)

He was witnessed by his minor friends who went along with him. The site was in sitio Bolo, Pal-ew Tanjay. March 8, 2020 at past 12 noon.

The bereaved and poor parents Mr and Mrs Angelo Hisma  y Despojo want some vindication for whoever is responsible for such negligence.(Right)

The power distributor  while it sympathized with the victim’s family,   Noreco 2 claimed  the wire was tapped illegally thus exempts them from liability.  However, the ex judge believes there is enough jurisprudence to show that  it is the responsibility of the power distributor to secure its lines from endangering other people. The line has not ceased to be that of Noreco 2.

Moreso that this line if tapped illegally was not quickly  secured so as to  put others out of  danger.. the illegal tapper should have been charged and  penalized   by Noreco2 for such violation, but was not; nor was the live wire taken away far from endangering others.

The poor parents are asking legal assistance  to gain justice. They are appealing to the FREE LEGAL assistance from the Integrated Bar of the Phils IBP  or the Salonga Law Center of Silliman University for assistance, and whose advocacy is to precisely help those poor and unduly  damaged and disadvantaged. (By RYAN SOROTE)