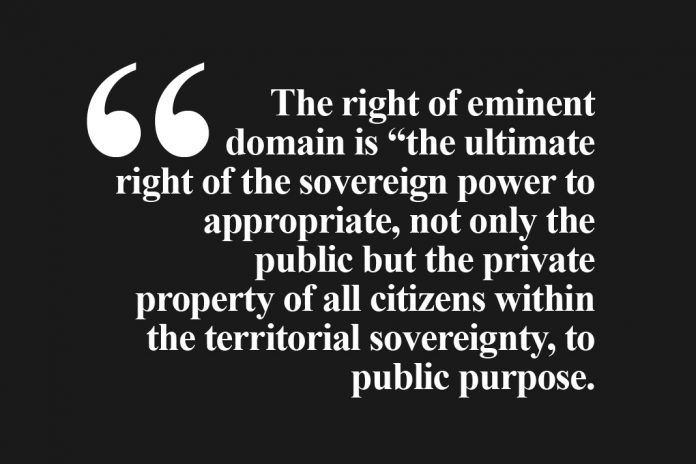 What is the power of eminent domain?

The right of eminent domain is “the ultimate right of the sovereign power to appropriate, not only the public but the private property of all citizens within the territorial sovereignty, to public purpose.” But the exercise of such right is not unlimited, for two mandatory requirements should underlie the Government’s exercise of the power of eminent domain, namely: (1) that it is for a particular public purpose; and (2) that just compensation be paid to the property owner. These requirements partake the nature of implied conditions that should be complied with to enable the condemnor to keep the property expropriated. (Mactan-Cebu International Airport Authority v. Lozada, Sr., G.R. No. 176625, February 25, 2010, 613 SCRA 618)

Can the government just take the property is taken under this power?

The payment of just compensation is required before the government can take properties under the power of eminent domain. Just compensation is defined as the full and fair equivalent of the property taken from its owner by the expropriator. The measure is not the taker’s gain, but the owner’s loss. The word “just” is used to intensify the meaning of the word “compensation” and to convey thereby the idea that the equivalent to be rendered for the property to be taken shall be real, substantial, full, and ample. (National Power Corporation v. Diato-Bernal, 653 Phil. 345, 354 (20 10)).

What should be considered before a taking under the power of eminent domain can be exercised?

Under Article III, Section 9 of the 1987 Constitution, it is guaranteed that the right of every owner whose land is being taken for public use to be paid with just compensation. Just compensation to be paid to the owner shall be based on the fair market value of the property. The following factors are considered in determining just compensation: 1) the classification and use for which the property is suited; 2) the developmental cost for improving the land; 3) the value declared by the owners; 4) the current selling price of similar lands in the vicinity; 5) the reasonable disturbance compensation for the removal and/or demolition of certain improvement on the land and for the value of improvements thereon; 6) the size, shape or location, tax declaration and zonal valuation of the land; 7) the price of the land as manifested in the ocular findings, oral as well as documentary evidence presented; and 8) such facts and events as to enable the affected property owners to have sufficient funds to acquire similarlysituated lands of approximate areas as those required from them by the government, and thereby rehabilitate themselves as early as possible (Section 5, RA 8974 or An Act to Facilitate the Acquisition of Rightof- Way, Site or Location for National Government Infrastructure Projects and For Other Purposes).